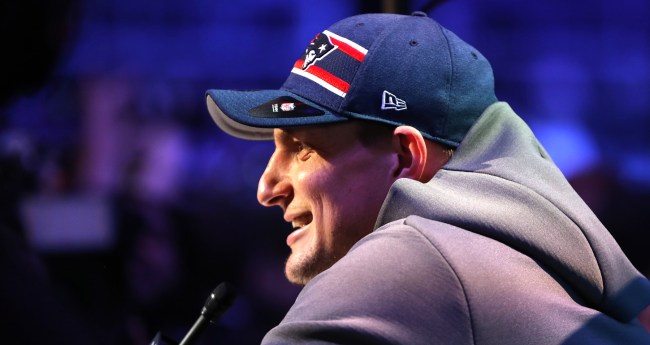 Rob Gronkowski and the number 69 have gone together like peanut butter and jelly ever since he was drafted by the New England Patriots with the 42nd pick in the 2010 NFL draft. It’s part of his schtick. Everyone knows it, and it’s usually pretty harmless.

But now, after a comment Gronk made to the media at Super Bowl LIII, and in particular to a female reporter, he’s in some hot water for his infatuation with the number 69.

Several people were steaming mad when Gronk was asked what number he would use to describe the chances he’s retiring, and he responded with a 69 joke. (This was in reference to Tom Brady saying there is “zero” chance he retires after Sunday’s game.)

On Tuesday, Chris Carlin of WFAN in New York brought attention to the remark on the Carlin, Maggie and Bart show, “He’s obviously making a stupid 69 joke, but you’re going to point to a female reporter in that setting and say ‘ask her?’ I don’t care who it is. Do whatever you want, dude. Just don’t be disrespectful in that setting.”

Co-host Maggie Gray agreed, “That one is a crossing the line. I think there has been a pass that’s been given to Rob Gronkowski for a really long time. I think part of the pass that he gets comes with the fact he is doing this and really doesn’t have anything in his past or in his private life that would indicate he actually has an issue. It just seems like an act.”

As did the third man in the booth, former NFL linebacker Bart Scott, “Workplace etiquette, right? He has to understand that this is business time, it’s workplace time, that you can’t go that route. It’s not the time or the place.”

They weren’t the only people upset by Gronk’s actions.

No reason to sexualize & involve an unsuspecting female doing her job in a professional environment in your lame 69 joke. But Gronk gets a pass even in 2019 because he's…Gronk. Bleeping Patriots. I wish she'd followed up & asked him why she would know what he's talking about.. https://t.co/vTl8gARkTJ

@MGolicJR57 if you REALY want the #MeToo⁠ ⁠movement to have a second wave that will have a lasting impact? Suspend @RobGronkowski for what he said to the female reporter about what his favorite number is. Great football player, complete idiot, not cool. Apologize or don’t play

Of course, there were also those who thought it was hilarious including, apparently, the female reporter Gronk pointed at when making the joke.

Fair is fair. @BrianCoz, who wrote the piece re: Gronk, just told me the female reporter was laughing hysterically at Gronk’s dumb 69 jokes. Hence, he pointed her out. My fault for assuming he just singled out a random female reporter. Still don’t love it, but only asses assume..

Lmao someone tried to say Gronk should be suspended for making a 69 reference in regards to being asked what the chances he comes back next year are. Yall gotta stop reaching.

Gronk has done exactly the same with male reporters, calling them out with a 69 reference. There’s audio of it from several years ago. He’s a goof with everyone

So, where do you fall on this excellent internet debate?