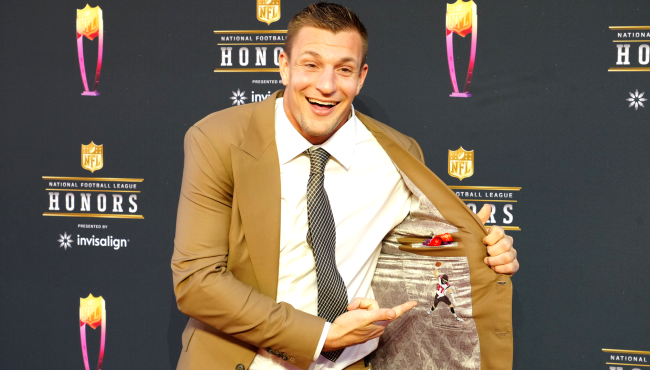 So we know that Tom Brady is coming back for at least one more season after retiring for a very lengthy 40 days away from the game. One thing we don’t know about the Tampa Bay Buccaneers next season is if TB12 will have his BFF Rob Gronkowski out there on the field with him.

When asked about his future football plans at Super Bowl LVI, Gronkowski was non-committal.

“I’ll figure all that out in the future,” Gronk said. “Let everything play out, then make a move. So I’m just relaxing, letting my body heal, have a good time, have some laughs.”

Brady, on the other hand, thinks Gronk is coming back.

“I think he’s going to come back but in a couple of years. The guy’s a beast,” he said.

According to one report, the Buffalo Bills are rather interested in signing the five time Pro Bowl tight end.

Another report says there is mutual interest between the 32 year-old and the Tennessee Titans, who are in dire need of a tight end.

As such, many NFL fans out there have been bugging Gronk, wanting to to announce his decision.

His response? A glorious TikTok video set to the theme from Reading Rainbow.

Perhaps that’s Gronk’s way of giving his boy Tom Brady “a little scare,” as he recently put it.

Either way, fans are seeming to enjoy this little back and forth between them and Gronkowski.

NO WAY ARE WE BEING TROLLED BY GRONK. LMAOO pic.twitter.com/psSZWIlz9i

This is objectively terrifying

Maybe we’ll get an answer from Gronk about whether he is returning right about the same time we also get one from Julian Edelman.

Related: Gronk Reacts To Speculation That Julian Edelman Is Also Coming Out Of Retirement