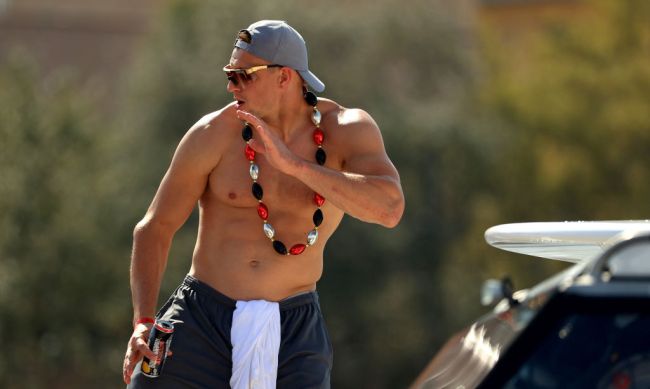 Rob Gronkowski is a fiesta. Everywhere he goes, the good times follow. Gronk and the rest of the Tampa Bay Buccaneers took to Hillsborough River for a championship boat parade on Wednesday after winning his fourth Super Bowl on Sunday. Trading duck boats in Boston for a luxurious yacht in the waters of Florida, the fun did not waver and he had himself a day. The drinking began early with no signs of slowing down.

.@RobGronkowski just said someone might need to take him out of here on an ambulance. pic.twitter.com/EO5AP1Igfk

Things began with wide receivers Scotty Miller, Chris Godwin and Mike Evans rolling up with tight ends Gronkowski and Cameron Brate to create the clear-cut craziest boat. Ironically, Gronk rolled up with the case of waters. As a knowledgable drinker, he knew the importance of staying hydrated in the hot sun.

Once the group got in the water with their select group of guests, it was clear that they meant business. And by business, I mean the exact opposite.

The dance party began right away, and we’d be wrong not to shoutout Camille Kostek for being able to hang with her boyfriend.

Here for @camillekostek getting down to Meek Mill’s ‘Dreams and Nightmares’pic.twitter.com/FgMJRHY8Gh

Gronk boat and Brady boat (with Alex Guerrero) are staying close, as you might expect. pic.twitter.com/1hxxTiaqVX

It wasn’t long thereafter that the tarp came off and Gronk was on the edge of the boat dancing shirtless. To his credit, he never once took a dip.

No chance Gronk stays on this boat pic.twitter.com/oqTQY9q4Bj

Gronk in his element 🕺 🚤

After spending the morning without the Lombardi Trophy, Gronk was on the receiving end of a legendary cross-boat pass and he took possession. It escalated quickly.

Gronk is out of control pic.twitter.com/SUXbQBkvGO

It was an incredible showing for Gronkowski, who had a big reputation to live up to after his celebrations with the Patriots.

The 31-year-old, who came out of a one-year retirement to join Tom Brady in Tampa, has said he is coming back for next season. Whether you root for them or not, it’d be pretty fun to watch Gronk party if they run it back.