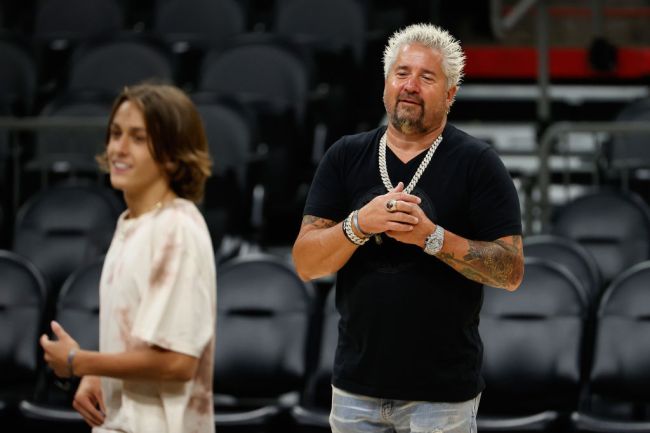 The Phoenix Suns grabbed a 2-0 series lead on the Milwaukee Bucks on Thursday night with a 118-108 win, but the real basketball didn’t actually start until after the game.

Guy Fieri sat courtside for the game and decided to hang around afterward to get up a few jumpers.

When you get the opportunity to shoot on an NBA court you take it, and Fieri did. Unfortunately, it was all caught on video, and the Food Network legend didn’t come close to making a shot.

Guy Fieri out here shooting on the court postgame because of course. pic.twitter.com/hwDVbcaKQk

While the first video is a bit rough to watch, the second one is even tougher as Fieri bricks another shot before a kid drains a deep three-pointer.

Final scene from Phoenix before the series shifts to Milwaukee — Guy Fieri bricking a mid-range jumper and then getting one splashed over him 90 minutes after the game is over pic.twitter.com/k1W938gRg6

We don’t slander Fieri here at BroBible, though. It’s okay that he didn’t make a single shot in these videos, he’s a busy man traveling the country for Diners, Drive-Ins & Dives and raising over $20 million for restaurant workers.