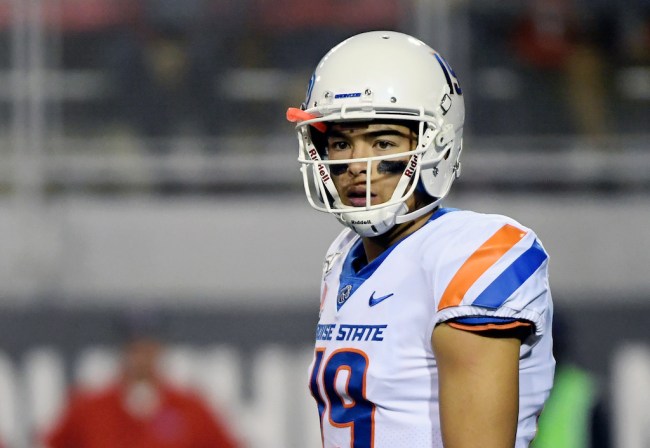 Like all college football players this past offseason, Boise State quarterback Hank Bachmeier had no idea what the current season was going to look like. Hell, as recent as August, nobody even knew if there would be games to be played due to the coronavirus pandemic, making it difficult to study playbooks and watch film of any upcoming opponents.

Bachmeier, who’s a sophomore, had a “secret weapon” to help him prepare, though: His girlfriend Jenna Vitamanti, who literally deserves an award for studying film as if she were planning to lace ’em up for the Broncos this season. Just look at what the signal-caller had to say when describing the couple’s routine heading into the college football season.

Per the Idaho Statesman:

Nightly, when the pair would FaceTime, Vitamanti would quiz Bachmeier about the Broncos’ playbook. The preparation paid off, of course, as he became the first true freshman quarterback to start a season opener for Boise State.

“In high school, I would sometimes help him a bit, but it was not even close to as complicated as when he got to Boise,” Vitamanti said. “The offense is so much more complex. He knew he’d have to put in the extensive amount of work to get where he is.”

Bachmeier would send Vitamanti pages from the Boise State playbook, and she would make flash cards with the play name and all important notes.

“I would literally just have her go over each install and have her read me the formation and the play and then I would go through it in my head,” Bachmeier said. “We’d be on FaceTime for like two hours every night going over it. She’d read play by play and I’d say right hash, left hash, flip the formation, and she’d go through it all.”

Added Vitamanti: “As soon as he got the playbook that spring, we started grinding. I would say the play, he’d draw it up on the whiteboard. Sometimes I’d leave out certain parts of the play call and have him fill in the blank.”

Wait, wait, wait… Hank Bachmeier’s girlfriend Jenna Vitamanti wasn’t just giving him inspiring words to get him to go watch film and study the playbook, but she was actually sitting there for hours to do it with him? Is she the greatest girlfriend in the history of girlfriends? Where on earth did she come from? Seriously, this is incredible, and proves that true love isn’t dead, guys.

While most ladies complain about their boyfriends playing video games and treating something like Madden as if it were real life, Bachmeier’s got himself a girlfriend who’s actually happy (and willing) to dive into the X’s and O’s. It’s almost too good to be true.

Oh, and then there’s this: When she’s not studying the playbook with her quarterbacking boyfriend, Jenna’s busy cheerleading for the Boise State football team, so, you know, she’s sort of the biggest catch of them all. Yo, Hank, make sure you hold on to this one.