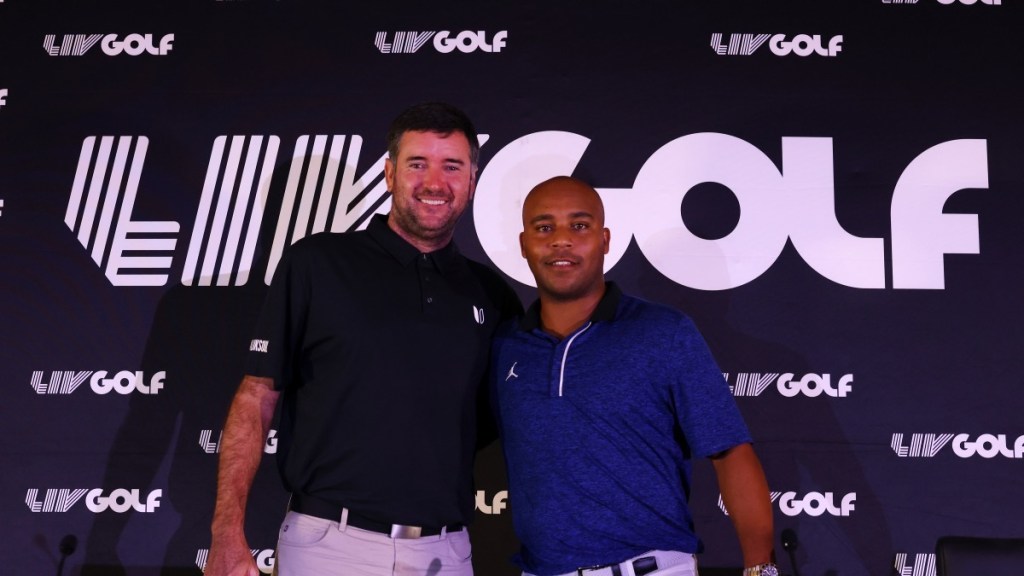 The LIV Golf Tour is in the Northeast this week for the LIV Golf Invitational Boston which runs from September 2nd through the 4th. There are some new faces on the tour this week, with the #2 ranked golfer in the world Cam Smith joining and former BroBible ‘Rippin It’ podcast co-host Harold Varner III making the jump from PGA to LIV.

HV3 made some interesting headlines after announcing his move to the LIV Golf Tour. For starters, he didn’t beat around the bush on the reasons why he chose to join LIV. He came out and admitted it was about the money and the money was too good to pass up.

Then another rising PGA Tour star hopped into Harold Varner III’s Instagram comments and it might’ve shown his hand about any possible intentions to leave the PGA Tour for LIV Golf. And that brings us to today, where Harold Varner III had his first press conference ahead of the LIV Golf Invitational Boston alongside Bubba Watson where HV3 took a shot over Bubba’s bow, so to speak.

Bubba Watson left the PGA Tour for the LIV Golf Tour but he’s been rehabbing a knee injury. The reported meniscus injury was supposed to have him sidelined for just 4 to 6 weeks but he’s still not playing.

Bubba shared a story about how he’s offered to make his fellow LIV players peanut butter and jelly sandwiches while he’s not playing:

If you need a PB&J on course, @bubbawatson is your man 🥪 #LIVGolf pic.twitter.com/zddzNmJwZO

Speaking afterward, Harold Varner III talked about the importance of teamwork. LIV Golf is entirely based on teams and the future of that tour depends on the success of the teams and their growth as individual entities.

HV3 is clearly a big team guy, but that didn’t stop him from throwing fellow LIV Golf member Bubba Watson under the bus with ‘I tried to tell Bubba that but he doesn’t get it. But now he’s not playing (and) I don’t know what to tell him.’ to which Bubba follows up with ‘it’s not all about me? dang…’

One observation I’ve had is how much these LIV Golf athletes smile. They’re always smiling. I’d be smiling too if I’d just signed contracts worth tens and tens of millions of dollars of guaranteed money.

But it’s vastly different than the business-forward approach always seen on the PGA Tour. And with Rory McIlroy press conferences he’s always defending the integrity of the game and thrust into the roll of PGA Tour champion and ambassador, answering questions about LIV Golf even when they weren’t asked. Meanwhile, the LIV Golf athletes seem to be completely stress-free on stage.