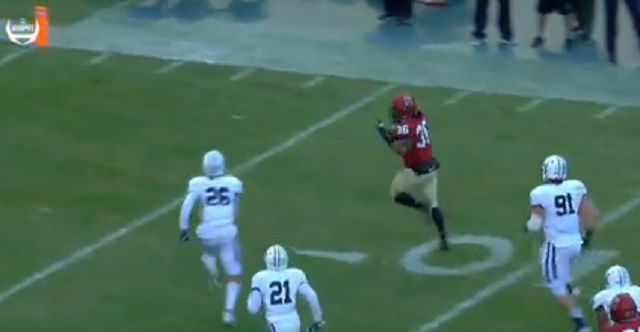 Harvard running back Devin Darrington found a creative way to have a touchdown taken away from him.

During today’s Harvard-Yale game, refs negated a TD run from Darrington after he flipped off the Yale defense before scoring.

Real weird call here: Sophomore running back Devin Darrington takes it in on a nice run….and then the refs call it back for taunting BEFORE he reached the end zone. I've never seen that from officials.

Don’t you point that finger! Harvard RB Devin Darrington is called for a taunting penalty on his way to scoring a TD. TD was called back! Harvard still leads 28-27 over Yale.

Harvard TD got called back for taunting after the RB gave the defense the finger pic.twitter.com/ClJXfwQENf