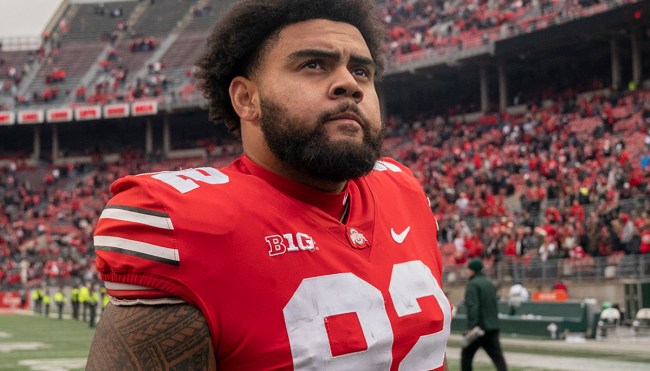 Every NFL Draft class is home to a number of guys who faced plenty of adversity while working toward their goal of playing football at the sport’s highest level (a reality that ESPN is far too eager to remind viewers about when the event rolls around each year), and it’s safe to say former Ohio State defensive tackle Haskell Garrett fits that particular bill.

Garrett—who is projected to get scooped up in the third or fourth round in the 2022 NFL Draft—played for the Buckeyes for five seasons but saw his promising future cast into doubt as a result of a terrifying incident that unfolded when he was shot in the face near his apartment in Columbus around 1 A.M. on Aug. 30, 2020.

The big man faced an uphill road to recovery but was still able to play eight games after returning to the field just two months after he was rushed to the ICU, and the following year, he scored the first touchdown of his college career on a fumble recovery and treated us to a Gus Johnson Moment for the ages as a result.

Here’s a young man that was SHOT IN THE FACE LAST YEAR…I was not ready for that 😂😂 pic.twitter.com/BKyJisNP78

Now, we’ve gotten a better idea of just how far Garrett has come since that fateful night, as this week marked the first time the DT has really opened up about the incident that resulted in him losing five teeth after a bullet ripped through both of his cheeks.

On Monday, ESPN published an in-depth examination of the shooting after sitting down with Garret, and on Tuesday, he appeared on Good Morning Football to candidly recount the details in a conversation with Kyle Brandt and Kay Adams.

"I wasn't going to let something like this distract me or get me off course from what was destined for me, and that was to be the starting DT at @ohiostatefb."

The story of how @HaskellGarrett returned to the field after a life threatening incident is inspiring. (via @gmfb) pic.twitter.com/IJyl2z9FYj

“It was a late night. I was going out to get my phone from my car… I was on the other side of the street and I saw this couple arguing. I didn’t think anything of it, I wasn’t going to say anything…

I saw another man hit a woman. One of our core values at Ohio State is Title IX; respect women. So immediately my instincts are to go help that woman.

I went over there. I intervened, and when I pushed him away from her and looked toward her, I looked back and everything just went black. The next thing I knew, I was picking myself up in a puddle of blood.

I hit a flight or fight moment. I didn’t have my phone. It was either lay here and die, or run back to the apartment and get help from Pete [Werner], my roommate. So I picked myself up with all the energy and all of the strength I had, ran home, and told my roommate, ‘I need help. Call an ambulance. I think I’ve been shot.'”

How can you not root for this dude?