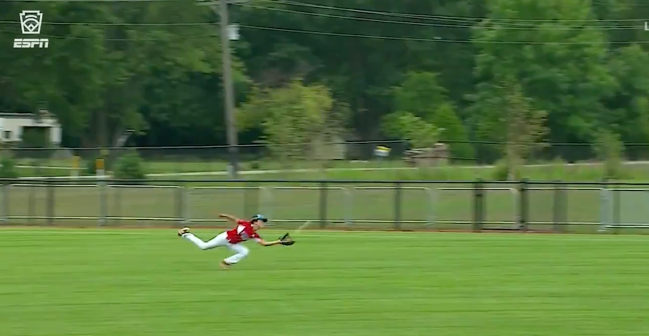 Hastings, Nebraska punched its ticket to its first-ever Little League World Series in epic fashion on Friday morning. With the game on the line, 11-year-old Jude Johnson made a ridiculous diving catch to send his team to Williamsport.

Facing the “state to the East” (I recently discovered that Iowa and Nebraska are huge rivals and refuse to say each other’s names), The Cornhusker state held a 2-1 lead in an elimination game of the Midwest Regional. Down to the final out, the winner would advance to the LLWS and the loser would go home.

With the game on the line and a runner on base, the Iowa batter knocked a blooper to right field. If it had dropped, the runner on second would likely have come home to score and tie the game.

Out of nowhere, Johnson came flying in to make the snow-cone grab. He went full-extension and snapped the leather to end the game.

A diving catch by Jude Johnson & Hastings, NE is headed to the Little League World Series! They even made sure that state to the East doesn’t go! pic.twitter.com/V5DjMQnmUs

The live-feed camera quickly cut to Johnson’s parents kissing in the stands (which was weird) and the team went bonkers on the diamond. Replays, however, show just how impressive the catch really was.

WHAT A CATCH TO CLINCH IT!

Nebraska’s Hastings Little League punches its ticket to Williamsport and will play for the Midwest Region Championship! #LLWS pic.twitter.com/KTbUd1oL21

Hastings, a town of about 25,000, is located about an hour outside of Lincoln, Neb. and is known as the town where Kool-Aid was invented. Now it is known as the second-ever little league from Nebraska to reach the biggest stage.

Because of COVID-19 concerns, international teams will not be allowed to compete at the LLWS this year. In turn, two teams from each region will advance to Williamsport and Hastings will finish no less than second in the Midwest. Nebraska will play for the region title on Saturday.