Who’s Winning The Heisman Trophy NEXT Year? The Odds Are Out, And We Could See A Back-To-Back Winner 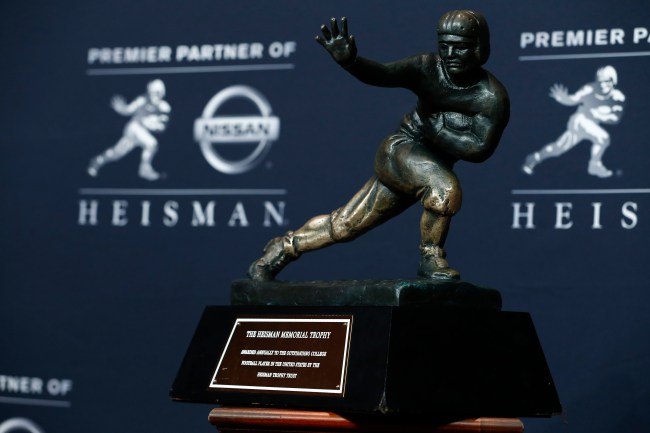 The Heisman Trophy presentation is tonight, and all three finalists — Alabama Crimson Tide quarterback Tua Tagovailoa, Ohio State Buckeyes Dwayne Haskins and Oklahoma Sooners quarterback Kyler Murray — put up incredible, video game-esque stats all season long, so they’re all worthy winners. That said, I did state my case yesterday for why Heisman voters should give it to Murray, but, again, it’s not as if it’ll be a huge shock if one of the other two guys earn the bronze statue.

While the three signal-callers will anxiously be awaiting (and hoping) their name is called tonight to receive the most prized individual award in college football each year, oddsmakers are already speculating which players might be in New York City this time next year, with the list of names already out for people to throw money out. Here are the players you might want to take a small gamble on, because, according to OddsShark, they’ve got the best chance of winning the Heisman Trophy next year.

In a not-so-surprising move, OddsShark has Alabama’s Tagovailoa atop their list, giving him +350 odds. Considering the guy just lit up the SEC and any other competition in the Tide’s path as a sophomore, there’s a very good chance we’ll see him among the final candidates again next season. Big question is, will he be going for his second Heisman?

While we’ve seen a handful of first-time winners of the award return to college football, and then be among the finalists the next season, over the years, former Ohio State running back Archie Griffin remains the only two-time Heisman Trophy winner, with the bullish runner winning it in 1974 and ’75. But, hey, history is meant to be broken, so the whispers for Tua Tagovailoa to become the second player to pull off the feat will start tonight if he ends up walking away with the Heisman Trophy.

The 2019 Heisman Trophy odds have some other worthy candidates with good odds, too — like Clemson Tigers quarterback Trevor Lawrence and Georgia Bulldogs quarterback Jake Fromm, to name a few — but the safe money, to me, is on the field. For every known superstar, like Tagovailoa, there are darkhorses who, seemingly, come from nowhere like Kyler Murray and Dwayne Haskins.