The Heisman Trophy Should Go To Kyler Murray (Not Tua Tagovailoa), So Voters Better Not Mess This Up 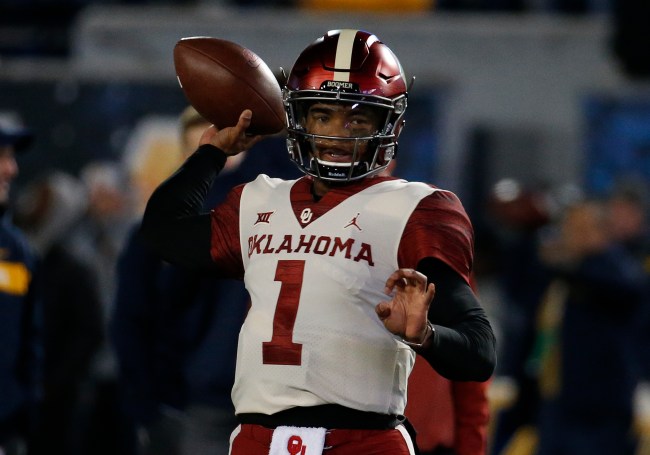 The Heisman Trophy presentation is tomorrow night, and, surprise, nobody has any idea who’s actually going to win the thing. All three finalists — Alabama quarterback Tua Tagovailoa, Ohio State quarterback Dwayne Haskins and Oklahoma quarterback Kyler Murray — all have legit arguments as to why they should walk away with the stiff-armed, bronze statue. The fact that there’s even a debate is a nice wrinkle in the event, because, in previous years, there’s been little drama as to who would win.

Well, here’s my pick: Kyler Murray — but I doubt the voters actually have the balls to give it to him.

Unfortunately, while Haskins has proven to be a superb signal-caller, leader and worthy candidate, he has almost zero shot at taking home the hardware. That’s the disadvantage in going up against two other superstars. For that reason, let’s focus on the Murray vs. Tagovailoa argument, with me giving some reasons why the first-year Oklahoma quarterback should be the one leaving New York City with the Heisman Trophy.

In a September 22 victory against Army, which actually required overtime, Murray accounted for every single touchdown the Sooners scored, as they squeaked out a 28-21 win. Sure, the final score was embarrassing, but the Heisman Trophy is an individual award, and scoring every point not called a PAT for your team is as individual as it gets.

Additionally, in Oklahoma’s lone loss this season to rival Texas, 48-45 on October 6 — which they avenged in the Big 12 Championship Game last week anyway — Kyler Murray scored 5 touchdowns and completed 73.1 percent of his passes, while rushing for 92 more yards. If the Sooners’ defense didn’t have as many holes in it as Swiss cheese, this guy would be the runaway Heisman Trophy winner.

While Tua Tagovailoa has put up insane, video game-like numbers while he’s been on the field — just as Murray has — the Alabama Crimson Tide have been a powerhouse in all phases of the game, meaning Tua’s not asked to carry as much of a burden for his team.

Murray Has Had More Opportunities For “Heisman” Moments

As I briefly mentioned above, it’s no fault of his own, but, let’s be honest here; the Alabama Crimson Tide have been the No 1 team in the country since before the season even started, meaning Tua Tagovailoa is able to sit in the fourth quarter as his teammates blowout the competition. In one way, that proves just how efficient he’s been, as he’s been responsible for 42 total touchdowns this season (37 passing, 5 running). Problem is, while impressive, that kills Tua’s Heisman Trophy argument.

On the contrary, Kyler Murray has led his team to victories in games that, on most teams, would be losses… did I mention how pathetic that Oklahoma defense has been?

I already gave the early-season example from the Army game, but Kyler Murray’s had a few other “Heisman moments” that voters better not overlook. From his second half dominance against Texas Tech after trailing at halftime, to overcoming a deficit in the final period versus West Virginia for a 59-56 win, to, finally, his leading the Sooners to the final 12 points in the fourth quarter of a 39-27 victory in the conference title game last week against Texas to punch their ticket to the College Football Playoff, Kyler Murray has proven to be a big-time player in big-time game when his team needed it more than Tua Tagovailoa has.

If there’s one, glaring reason why Tua Tagovailoa shouldn’t win this year’s Heisman Trophy, it might be the other guy sitting in the quarterback room with him everyday, Jalen Hurts. Hurts, who won 26 games before his junior season and led Alabama to two College Football Playoff national championship games, surprisingly lost his starting gig this season to Tua after the latter led Alabama to last year’s national title with a surprising second half comeback against Georgia.

Want to talk about Heisman moments? Well, Hurts had a mini one of his own last weekend, copping some revenge on being benched last year by leading his team to a 35-28 victory over Georgia in this year’s SEC Championship Game. It was one of those times that Tua, not Hurts, needed to prove he deserved the Heisman. Unfortunately, an injury didn’t allow that to happen, and it might cost Tua the most prestigious individual award in sports.

Again, it’s no fault of his own that Alabama has depth at every position, with future NFL players at nearly every position. But, when comparing two quarterbacks who both have insane offensive stats, it’s hard to ignore the fact that, had Jalen Hurts been starting, not Tua, there’s a good chance he would be the won with a Heisman Trophy argument because of such talent in Tuscaloosa. For me, along with last weekend’s big-time win against Georgia, that’s enough to knock some points off of Tua’s Heisman case.

This isn’t to say that Kyler Murray is better than Tua Tagovailoa and Dwayne Haskins — because, as we know, the Heisman Trophy doesn’t always go to the best player in college football. All three have the stats, the character and the charisma to be welcomed into a distinguished fraternity of past winners, and, just like qualified candidates for a job opening, one must come out on top. Kyler Murray should be this year’s Heisman Trophy winner because he’s the most valuable player in college football, and I just hope the voters get this things right.