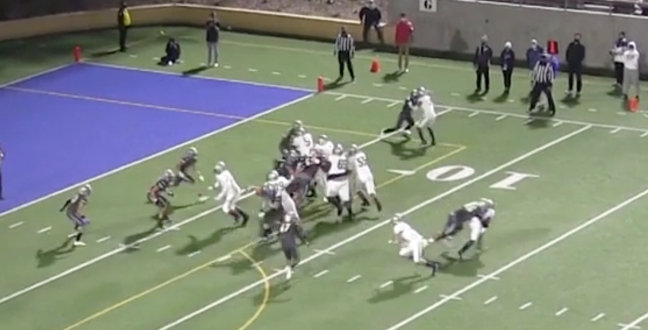 Hero Kanu stands 6-foot-5, 290 pounds at 16 years old. His size makes him stand out on its own, but his story is even more intriguing. Kanu has played just two high school football games in America and already racked up 10 Division I scholarship offers.

Known as the ‘Bavarian Baby Suh,’ in reference to 12-year NFL veteran Ndamukong Suh, Kanu moved from Geltendorf, Germany to Southern California in pursuit of his dream to play football in the United States. His home town has a total population of less than 6,000, sits about an hour outside of Munich, and does not have a significant American football presence, let alone an actual team. Kanu grew up playing soccer, but always had his eye on the pigskin. As a 14-year-old, his love for the gridiron game started to become a legitimate possibility for his future.

The Athletic — It started when a friend introduced Kanu to Brandon Collier, the former UMass defensive tackle who lives in Germany and runs a company called PPI Recruits that connects European football players with American universities. At the time, Kanu was 14. He stood 6-3 and weighed 250. “You could tell his growth plates were wide open,” Collier said. Kanu had been playing defender in soccer. As Collier put Kanu through different football drills, the American expat marveled at how easily Kanu moved considering his size. “From the soccer background, he had great feet,” Collier said. “I knew when he started playing football he’d be really good.”

He has grown two inches and put on nearly 50 pounds since his first conversation with Collier, but his agility and movement has not wavered. Kanu is a freak.

@HeroKanu 6’5 293lbs competes against our skill players in agility drills!

I ask him last year what he was going to be and he said “1st Round, 1st Pick”

Kid will be one of the best!!! pic.twitter.com/CukaviFlSa

This past fall, Kanu enrolled at Santa Margarita Catholic High School in Rancho Santa Margarita, California. The school has become a landing spot for German-based football players who want to take their games to the states. After the fall season was postponed due to COVID-19, Kanu began his career on March 12 and made an immediate, dominant impact for the Eagles at defensive tackle.

This kid just turned 16 years old and he is going to be special!

Three days later, Kanu got on the phone with Washington University assistant Rip Rowan, expecting to begin a relationship that might eventually lead to an offer. Nope, the Huskies offered him a scholarship right then and there. One game, one full ride.

The offers kept coming and Kanu now has reported offers from Washington, Arizona, Arizona State, Oregon, Kentucky, Penn State, USC, Ole Miss, Michigan, TCU and Colorado. Kanu’s list only continues to grow and he will be able to play anywhere he wants when it is all said and done. He began as a zero-star recruit, because nobody knew who he was, and he’s already up to three-stars after his second game. His tape for someone who has played only two games is simply disturbing, in the best sense of the word.

@HeroKanu 6’5 293lbs had 3 TFLs last Night this kid can be the first International 5 ⭐️ when he keep getting better! pic.twitter.com/aBRN9QAlqa

Watch @HeroKanu #45 at DT in California fight off 2 blockers then show a great burst with a physical tackle on the back!

At 6’5 293lbs that short area burst is special! @PPIRecruits pic.twitter.com/sD84q3eEjt

Reads the guard pull crosses the face of the center for a TFL!!!

He has measurements, combine numbers, and film! @SWiltfong247 @RivalsFriedman pic.twitter.com/4eVrP5UJQ8

@HeroKanu #45 vs Bosco in California at nose 6’5 293lbs watch the great get off and how he pushes the center into the pulling guard, then shrugs the lineman off and make a tackle!

This dude can be the most dominate DT in this class when he keeps working! pic.twitter.com/ezvWuZcTDx

Kanu is currently a junior at Santa Margarita and he will play this unique spring season and next year’s traditional fall season before putting pen to paper and heading to the Division I level. He is on his way to becoming the first-ever international five-star recruit and will have schools all over the country fighting to get him on their defensive line, and whichever program ends up landing the Bavarian Baby Suh will be very happy.