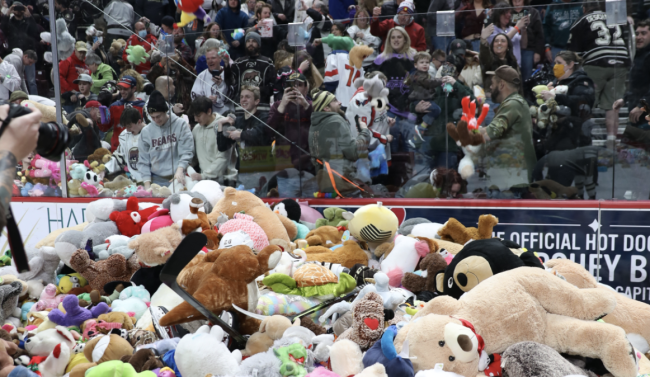 The Hershey Bears broke a world record again on Saturday. During the 20th annual Teddy Bear Toss, hockey fans threw more than 50,000 stuffed bears onto the ice and watching them rain down from the stands never gets old.

Every year, the AHL affiliate for the Washington Capitals in Hershey, Pennsylvania holds a charity event for more than 25 local organizations. Fans are encouraged to bring their new or gently used stuffed animals to the game, and after the first goal is scored, to throw them onto the ice.

After the seemingly endless monsoon of plush toys comes to a halt, they are collected, counted and donated. It’s awesome.

This year, the Bears collected 52,341 different animals. The massive number broke the team’s own record that was set in 2019 with 45,650. This year’s event shattered that number by more than 6,000.

Tonight, we BREAK our own record! The 2022 @GiantFoodStores Teddy Bear Toss has produced a grand total of 52,341 stuffed animals! THANK YOU! #TeddyBearTossHershey #HersheyBearsCares pic.twitter.com/0WUEYd6ULy

Take a look at the absolute scenes:

And here’s what it looked like on the television broadcast:

The pile of bears was massive.

There were so many stuffed animals that players were doing belly flops and diving into the pile.

HELP I’VE FALLEN AND I CAN’T GET UP #TeddyBearTossHershey pic.twitter.com/7IkOsGA8Ng

The official attendance at the game was announced as a sell-out crowd of 10,514. That comes out to 4.98 bears per fan, which is a tremendous reflection upon the people of Hershey. It is a tight-knit community that loves to give back and Saturday’s Teddy Bear Toss is the perfect example.

Watching the toss will never get old, so here are a few more looks at last night:

Went to a teddy bear 🧸 toss and a hockey 🏒 game broke out! @TheHersheyBears @allieberube pic.twitter.com/OguZkdKWRN

Got to go to my first teddy bear toss with the Hershey Bears! We got a shut out, a hat trick, a fight and over 50,000 bears thrown, hell of a night! pic.twitter.com/bZCJyjqvJl

From earlier tonight because the Giant Center’s Wi-Fi blows, the annual teddy bear toss. This went on for at least 5-10 minutes after the video cuts out. Over 52,000 bears total collected! pic.twitter.com/92Jwbhn6ak

got a teddy bear toss in Hershey! 🐻@TheHersheyBears @spittinchiclets pic.twitter.com/X3NKDxKC1f

Another amazing teddy bear toss, so glad to be back after two years! @TheHersheyBears @Buccigross #TeddyBearTossHershey pic.twitter.com/U0r219qgF8