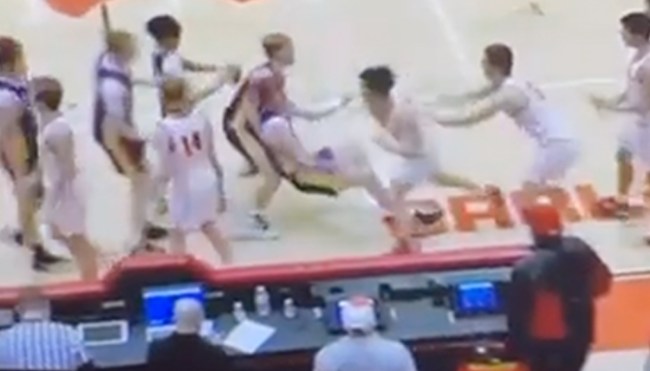 The Stanley Cup playoffs are my favorite sporting event on the planet for a number of reasons, and one of the coolest aspects of the NHL postseason is seeing players from both teams line up to shake hands and share words of encouragement after a hard-fought series out of mutual respect.

I’ve always found that tradition particularly admirable based on the amount of anger and frustration that routinely pumped through my veins when I was forced to do the same following a comparatively low-stakes regular season Little League game when I was a kid.

In situations like that, it’s not super uncommon to see a kid on the losing side spit on his batting glove before going through the handshake line or pull the classic “Saying ‘Bad Game” Instead Of “Good Game'” move that’s sure to draw the ire of any coach who overhears them. However, that lack of sportsmanship has nothing on what unfolded during a high school basketball game in Iowa on Tuesday.

According to Yahoo News, an ugly incident took place in the wake of a showdown between the Carlisle Wildcats and the Nevada Cubs that saw the latter walk away with a 72-47 victory to kick off its season. During the customary postgame exchange, things went off the rails when a Carlisle player punched his opponent in the stomach and the head before another member of Nevada’s team wrestled the assailant to the ground.

According to KCCI, the player at the receiving end of the blows needed stitches and was reportedly unconscious for multiple minutes after the attack. After investigating the incident, Carlisle police have elected to charge the 17-year-old responsible for the attack with inflicting “willful injury,” but it is unclear what discipline he’ll face if found guilty.