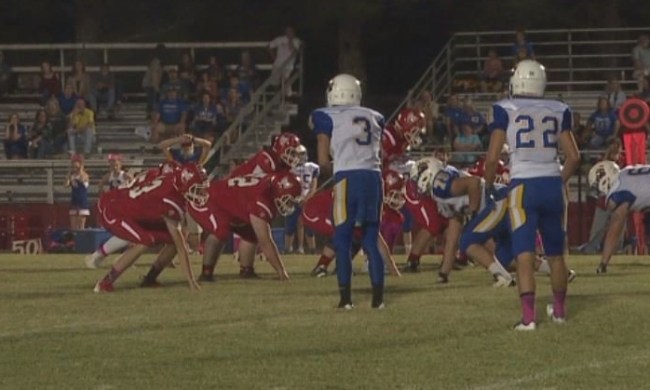 Remember when the Little Giants were a steaming pile of dog shit, and then Ice Box swooned a superiorly athletic Junior Floyd (Devon Sawa) to join that nerdberger with the snot bubble and that chubbster with the Cheetos in his helmet? The Little Giants were a totally different team with Junior Floyd’s leadership and general knowledge of the rudimentary aspects of the game.

Well, that is kinda sorta what happened to this small-town football team in Arkansas.

According to KATV, the Mountain Pine high school football team hasn’t made the state playoffs since 2010 and has won a total of three games over the past six years. Just pitifully awful.

Following a winless season last year, the Mountain Pine Red Devils opened the season by getting abused 35-0. It looked like it was going to be same shit, different toilet for the squad in 2017. Fast forward a couple months and Mountain Pine is currently 7-1, riding a seven-game winning streak.

So what changed? Mountain Pine brought in its Junior Floyd after game one.

Hometown. Mountain Pine(red) had to quit their season last yr Bc they didn’t have enough players. This yr, 7 wins and no conference Losses. pic.twitter.com/ugDAocVvLs

The athletic phenom transferred schools districts and was initially ruled ineligible by the Arkansas Activities Association. The 17-year-old gained eligibility by exercising Rule 16, Subsection A, Exception 6, which states that if a “… student is married and living with a spouse … who had an established domicile in the district one year prior to the marriage …” then he or she is instantly eligible.

The dude got married to a student in the district and moved in with her parents. At 17.

Since becoming eligible, he’s racked up 100 yards in every game he’s played and scored 16 touchdowns in just seven games.

The bride’s father emailed the AAA with the marriage certificate confirming that the teens had married “due to a certain circumstance.” He told KATV, however, that the primary reason for this union does not involve sports or eligibility.

There has to be more to this story. No self-respecting adults would let two 17 year olds ties the knot if something fishy wasn’t going down. I’m of the school of thought that you should not be allowed to get married before you’re allowed to step into a strip club. I still had an AIM screen name at 17. Still writing my girlfriend hand-written ‘I love you forever’ notes. I checked her out on Facebook the other day and she now has a neck tattoo. These parents have the mortgage riding on a Mountain Pine playoff appearance. No other logical explanation for this.