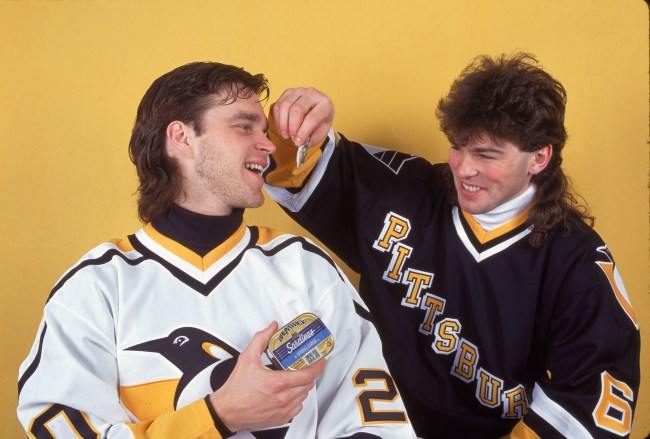 High school hockey in the state of Minnesota is a F’in religion, with, seemingly, every kid, boy and girl, growing up on the ice and learning to skate just as fast as they learned to walk. It’s why the movie The Mighty Ducks is so legit, because that’s literally how obsessed kids in Minnesota are about playing a little puck.

The only thing that kids take more pride in than their hockey ability in Minnesota is their hair while playing hockey, with many throwing it back to the old school with some wicked cuts that resemble the legendary Jaromir Jagr’s style back in the day. And, because high school hockey players don’t mess around when it comes to their hair, take a peek at some of the looks kids from New Ulm High School and Mahtomedi High School showed-off during introductions before their Minnesota state hockey tournament matchup tonight — which come to us courtesy of CJ Zero’s Twitter account.

Those. Are. Unreal. Seriously, it makes me wish I wasn’t thinning up top, because I’d try duplicating these things — even if I am 34 years old who’s supposed to be “an adult.”

Not to be outdone, the opposing team from Mahtomedi High School made sure that their flow was every bit as solid, too. Take a look at the cuts that some of the players were sporting.

Mahtomedi had a few guys bring it as well, I'm also down with the headbands pic.twitter.com/kQBZ6PWpxj

Who the hell knows who’s cutting the hair of these high school hockey teams, but it’s clear they have some badass taste, because they all look so sick. Props to the bros for taking so much pride in the mullets, the perms, the mohawks and everything in-between. Oh, and the facial hair is obviously a nice complement to it all, so, no matter who wins the contest between these two teams, they all come out as winners in my book with these kind of looks.