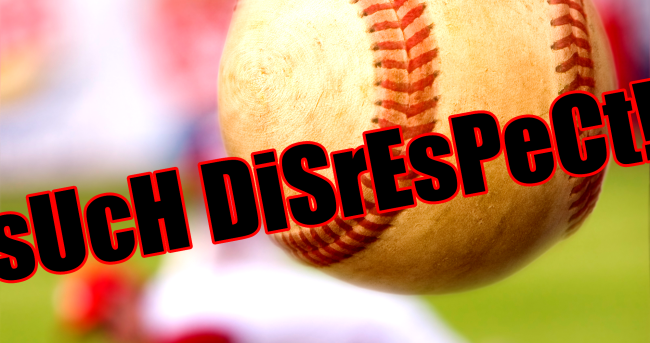 Sam Cozart, a right handed high school pitcher from High Point, North Carolina won’t even be graduating until 2025 and he has already committed to Mississippi State.

Why? Because the Wesleyan Christian Academy freshman is the number one prospect in Perfect Game’s class of 2025. He is also the top ranked righthanded pitcher in the 2025 Prep Baseball Report rankings.

Cozart is 6-7, 240 pounds, throws 92+ miles per hour, and he can do things like wave at a batter, mid wind-up, before striking him out to complete an immaculate inning (9 pitches, 9 strikes).

Sam Cozart (NC) starts off the spring with the immaculate inning, 9 pitches to register 3 K’s for the 2025 grad, FB 88-91, Mississippi State commit pic.twitter.com/lkxzsTJX7B

That… was the complete opposite of what we saw a pitcher do on Thursday when top high school baseball prospect Termarr Johnson hit a home run so hard the pitcher high fived him.

Baseball fans, depending on if they are “purists” or not, had differing reactions to Sam Cozart showing up his opponent.

What I wanna know.. when did Perfect Game REALLY stoop to this level and start letting this kind of shit happen? If it wasn’t at a showcase, the kid would get a fastball to the ear his next at-bat. I’d rather hit a bomb off him.. but EITHER WAY, one of the 2 would make him stop.

Why do we confuse having fun with being disrespectful. So many ways to have fun that don’t disrespect your opponent. Give me a bat flip or a fist pump, but this is too much. Classless

Baseball is a dying sport bc of its fans lmao what a comment section. If you don’t act like a robot, it’s to the bench lol. Never seen a fan base who actually wants taunting penalties 😂 if I’m throwing 99 and D1 committed, I’m gonna mess around

IDC if he’s throwing 99…. You play for me and do that crap….enjoy the end of the bench. And now face your teammates as to why your best pitcher is on ice. Celebrate a K sure…..that type of inning..for sure. Do that in the middle of a pitch? NO fucking way.

In an interview with 247Sports.com last year, Cozart said, “I throw a four-seam fastball. It is similar to (Mississippi State RHP Will) Bednar’s fastball, it has a little rise to it. I always command with my fastball and I can finish with my slider. I also command my cutter and changeup behind those two pitches. My command of my fastball, cutter and slider is pretty consistent.”

All of that is helped by the massive size of the young man’s hands.

Also, for what it’s worth, Cozart said in that same interview, “I always strive to show that I am better than the hitters that I face but I am also humble about it.”

Was he being humble when he waved at that batter? No, he certainly wasn’t. Was he being a kid with grown man skills that hasn’t even gotten his driver’s license yet? Absolutely. He’ll learn.