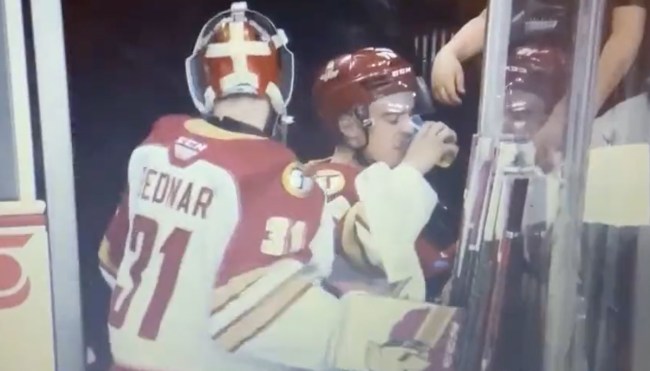 Earlier this year, a bullpen catcher on the Texas Longhorns baseball team was forced to add “former” to the start of that descriptor when he was kicked off the squad courtesy of a video of him drinking from a flask that was handed to him by a fan in the middle of a game.

It doesn’t take a genius to figure out why the Longhorns opted to sever ties with the player in question. In addition to being the textbook definition of a “bad look,” there aren’t many situations where an athlete is going to gain a competitive edge by boozing during a contest.

With that said, there is some evidence that suggests downing a moderate amount of beer can be a solid option when it comes to helping your body recover after strenuous exercise—which is exactly what one junior hockey player in Canada did in legendary fashion after capping an absolute marathon earlier this week.

According to Global News, the Acadie Bathurst Titan and the Halifax Mooseheads of the QMJHL had one hell of a playoff showdown on Wednesday night, as it took the two teams more than five hours to settle a triple-overtime contest that ended with the Titan walking away with the 4-3 win.

However, the victory was largely overshadowed by how Thomas Belgarde chose to celebrate it, as the 20-year-old Québécois center paused on his way back to the locker room to chug the beer remaining in a cup that was offered to him by a fan sitting next to the tunnel.

How can you not love that move?