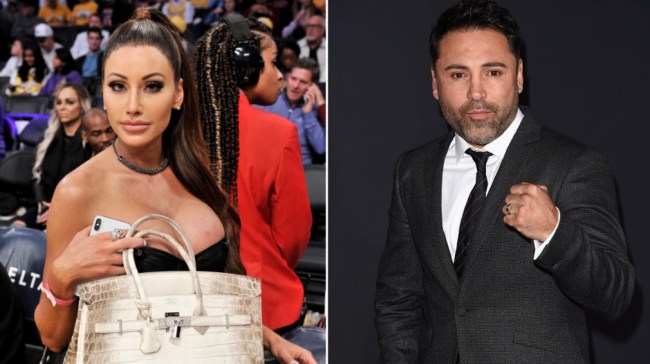 Holly Sonders has apparently moved on from her relationship with famous sports gambler Vegas Dave and has a new man in her life.

According to TMZ, Sonders was spotted on a date with boxer/boxing promoter Oscar De La Hoya over the weekend in LA.

Apparently, De La Hoya met Sonders when she interviewed him at a boxing event back in June.

We’re told De La Hoya and Sonders met at a boxing event HS was working in June … where she interviewed the former 6-weight class world champion.

The sparks obviously were flying … and we’re told they’ve been inseparable ever since.

In fact, the new couple recently took a trip to Pebble Beach golf course where they hit the links together.

The 48-year-old De La Hoya recently announced his return to boxing and will be facing former UFC champion Vitor Belfort in the boxing ring on September 11th.

First face off between Oscar De La Hoya and Vitor Belfort for their fight on September 11@OscarDeLaHoya @vitorbelfort pic.twitter.com/umkDv5MWmI