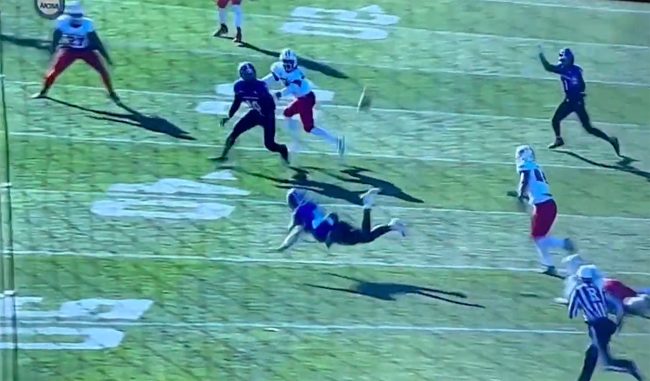 After beating UConn earlier this year, Holy Cross football is on to the second round of the FCS college football playoffs. The Crusaders, who compete in the Patriot League, finished the regular season with a 9-2 record.

Holy Cross earned a playoff birth with its play and faced Sacred Heart in the first round on Saturday. On the FCS level, the top eight teams get a first round bye.

That was not the case for the Crusaders, who beat the Pioneers 13-10 to face Villanova in the second round. After trailing by four for much of the game, it came down to one final possession.

With 22 seconds left in the game, quarterback Matthew Sluka completed a 35-yard touchdown pass, its first touchdown of the day, to win it.

However, that was not the craziest throw that Sluka made on the afternoon. Earlier, in the first half, he went full wizard mode.

After taking the snap and being chased out of the pocket to the left, Sluka was tripped up by a Sacred Heart defender. As he was falling to the ground, at a near-vertical level, he underhand chucked the ball downfield.

Fortunately for him, amidst a sea of Pioneers, his receiver happened to be in the right place at the right time and pulled in the catch. It was chaotic, crazy and crazy chaotic.

Sluka’s decision not to just take the sack but to instead huck the ball up into coverage is ill-advised. But who cares?! It was awesome.