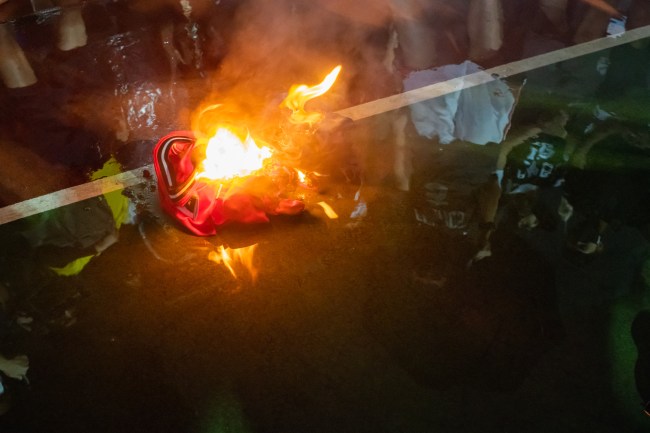 Protesters who are fighting for democracy in Hong Kong are not happy with LeBron James right now.

Last night LeBron was heavily criticized when he told the media that Houston Rockets GM Daryl Morey ‘wasn’t educated on the situation” in Chima when he fired off a “Freedom for Hong Kong” tweet last week.

“We all talk about freedom of speech — yes, we do have freedom of speech. But at times, there are ramifications for the negative that can happen when you’re not thinking about others and you’re only thinking about yourself. I don’t believe — I don’t want to get into a … feud with Daryl Morey but I believe he wasn’t educated on the situation at hand. And he spoke. And so many people could have been harmed, not only financially but emotionally, physically and spiritually.”So just be careful with what we tweet and what we say and what we do, even though, yes, we do have freedom of speech. But the can be a lot of negative that comes from that speech.”

LeBron would later try to clarify his comments by stating that trying to convey that he believed Morey was “misinformed” about the ramifications of his tweet.

Today, protesters in Hong Kong held a “Stand for Morey” rally where they trampled and burned LeBron James’ jerseys on the street.

When the ball smashed into a photo of LeBron James’ face stuck above the hoop and dropped into the basket, the Hong Kong protesters cheered.

They also trampled on jerseys bearing his name and gathered in a semicircle to watch one burn.

James’ standing among basketball fans in Hong Kong took a hit because of comments the NBA star made about free speech. Fans gathered on courts amid Hong Kong’s high-rise buildings Tuesday to vent their anger.
“People are angry,” said James Lo, a web designer who runs a Hong Kong basketball fan page on Facebook. He said he’s already received a video from a protester that showed him burning a No. 23 jersey bearing James’ name.

Some NBA fans in Hong Kong are burning LeBron James jerseys, after he commented on the Houston Rockets GM's tweet that supported protesters.

James said people should be careful what they tweet because "a lot of negative" can come with free speech. pic.twitter.com/PXHd2mIpvF

The NBA is worth $4B+ in China, reports Forbes. But when Rockets GM Daryl Morey tweeted (then deleted) support for HK protesters, numerous Chinese companies suspended business w/ the NBA.

Never side with the communists. Never! pic.twitter.com/cayGvE1dDT