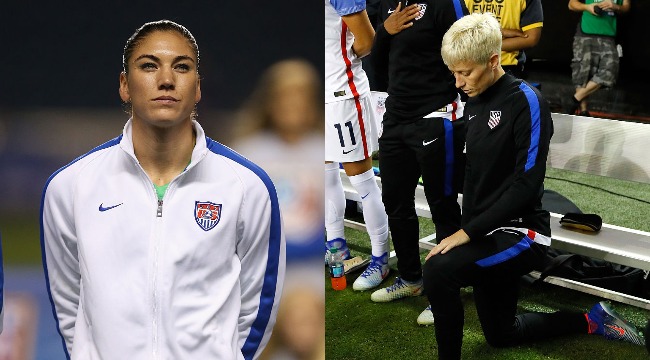 The thing about the internet is that it is very easy to consult relevant information to confirm or deny validity of allegations.

Hope Solo may have forgotten about the capabilities of internet sleuths during an interview with Goal on its All of Us show.

The two-time Olympic gold medalist, who claims to live in a “very conservative area in North Carolina and has friends on both sides of the aisle,” accused former teammate Megan Rapinoe of “bullying” players into kneeling for the causes she was championing.

“I’ve seen Megan Rapinoe almost bully players into kneeling because she really wants to stand up for something in her particular way. But it’s our right as Americans to do it whatever way we’re comfortable with and I think that’s really hard being on the main stage right now with so many political issues for athletes. There’s a lot of pressure and ultimately at the end of the day our number one focus should and has always been to win first.”

Solo’s last appearance with the USWNT was at the 2016 Rio Olympics, two weeks before Rapinoe joined Colin Kaepernick in kneeling for the anthem. Rapinoe also kneeled alone, with not one other teammate accompanying her.

Just a reminder that Solo was suspended from the #USWNT, took a leave from the Reign, underwent shoulder surgery, and hasn’t stepped foot in a locker room with Rapinoe since before Rapinoe first kneeled. Not sure Solo is the credible source on this she thinks she is. #NWSL https://t.co/ObkcCj2bmw

Hope solo when people figure out she was off team USA a month before rapinoe starting kneeing pic.twitter.com/thdZ9lzNCp

US Soccer terminated Solo’s contract in August 2016 after branding Swedish rivals ‘cowards’ following a game at the Rio Olympics. The suspension marked her second and US Soccer claimed the termination was influenced by her 2014 arrest in which she was charged with assault against her half-sister and nephew. Hope also served a 30-day suspension in 2015 after her husband was arrested for drunk driving in a borrowed team van. Solo was riding shotgun.

Hope Solo when she gets tired of seeing Megan Rapinoe trending: 👀 pic.twitter.com/QNSFog07TV

Despite Solo’s past transgressions, Rapinoe’s massive influence on women’s soccer is viewed by some to be performative and gloryhounding. In 2019, Rapinoe urged teammates to pass on the customary visit to the White House following the US women’s team World Cup victory in 2019, telling reporters, “I’m not going to the f****** White House.”

At the time of this writing, Rapinoe has yet to respond to the allegations, and given Solo’s credibility issues in the past, I’ll need another USWNT player to confirm or deny.

Preferably someone who hasn’t beaten the bag out of her own nephew.