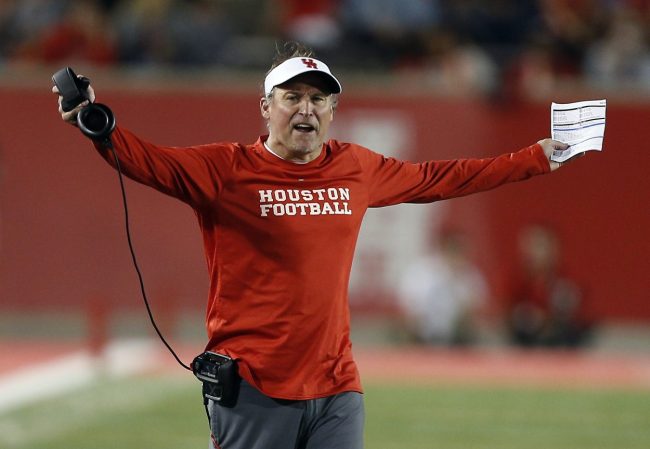 Houston football capped a 12-win season with a 17-13 win over Auburn in the Birmingham Bowl on Tuesday. The Cougars continued the streak of ranked opponents beating a ranked opponent in the game by handling the Tigers, but head coach Dana Holgorsen was not in a good mood at the postgame press conference.

He and his team was forced to wait. Auburn head coach Brian Harsin and his players were invited to speak first, while Holgorsen and his two player representatives stood out in the hallway.

Apparently he told the Tigers to hurry up.

He also yelled hurry up during Bryan Harsin’s conference from outside the door. https://t.co/TDWzTdDEVQ

When Holgorsen was asked for an opening statement, he made his thoughts very clear. After shaking his head, he said “Yeah, you need to have separate press conferences during this. You know, we won the game and I’m just standing out there for 20 minutes. I don’t quite understand that, I’d get that together.”

His players, on either side of their head coach, had to stifle a laugh.

Houston coach Dana Holgorsen wasn't pleased with being second up in postgame pressers after beating Auburn in the #BirminghamBowl: "Ya know, we won the game and I'm just standing out there for 20 minutes. I don't quite understand that." #GoCoogs @Holgorsendana pic.twitter.com/kRfSrE57sh

Holgorsen has never been one to mince his words, but it was a rather strange hill to die on. Perhaps the Cougars had reservations at one of the delicious dining establishments? Maybe Holgorsen wanted to swing by the local watering hole and sip on some bourbon?

Regardless of the reason, the 50-year-old head coach, who has been with the program since 2019, was not thrilled with the media setup after winning his first bowl game with the school. Next year, wherever Houston ends up, the bowl game better be sure to let Holgorsen speak first.