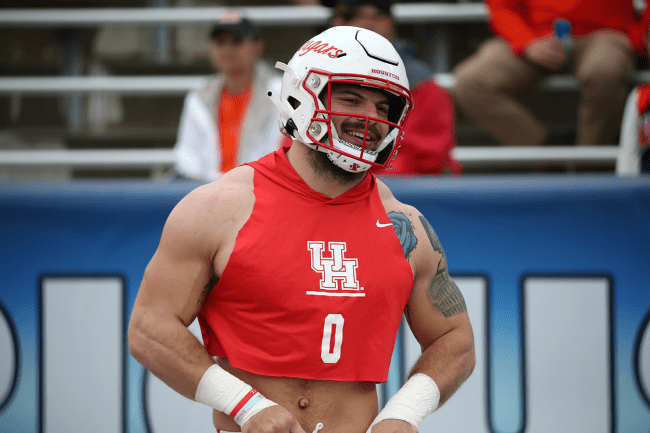 Derek Parish is entering his redshirt senior year as a member of the Houston Cougars football team this fall. He an animal.

Although the Texas-native plays primarily as a defensive end, he has played linebacker, fullback and all over the defensive line throughout his career. The former three-star recruit committed to the Cougars as a linebacker, but has been a Jack of all trades because he is such a freak athlete.

Parish is a menace for opposing offensive linemen.

Derek Parish uses his hands well to get around the edge, and D'Anthony Jones there to clean it up if needed. Houston dominated Tulane's tackles Thursday pic.twitter.com/41NjtlNg0v

And you better not let him get loose, because he will burn you in the other direction. As a former fullback, he isn’t just a big lug— he has wheels.

Parish is expected to return to his starting role on the defensive line this fall. He will be a crucial component to Houston’s success in the pass rush.

To prepare for the 2022 season, what could be Parish’s last on the collegiate level, he is in the weight room getting big. Well, even bigger than he already was.

On Wednesday afternoon, the Cougars shared a peek at their team workouts, specifically Parish’s. His teammates gathered around him and went absolutely bonkers as he proceeded to put up a personal-best 425-pound power clean. It is an adrenaline rush, take a look:

This man @ParishDerek is BUILT DIFFERENT.

Parish lifted 1.73 times his body weight and did so in style. Opposing tackles will not be happy to see him across the line of scrimmage this fall.