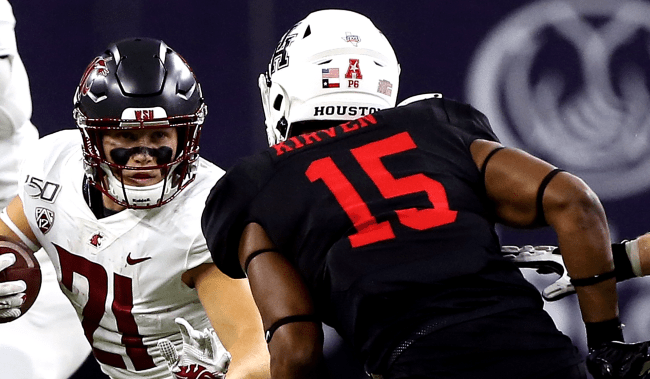 Former University of Houston linebacker Zamar Kirven, who started five games for the Cougars in 2019, has been charged with capital murder in a double-homicide in Mart, Texas, reports KWTX-CBS.

The 21-year-old is accused of shooting and killing two men, one age 22 and the other 20, who were reportedly ex-football teammates at Mart High School, located about 30 miles east of Waco, according to McLennan County Sheriff Parnell McNamara.

The shooting occurred around 2 a.m. Sunday morning. Both men were killed in the same house and and may have been asleep when they were murdered.

Kirven played in 15 games for the Cougars from 2018 to 2020, but was reportedly kicked off the team in December 2020 for a team rules violation and had entered the transfer portal.

“University of Houston backup linebacker Zamar Kirven has entered the transfer portal,” the Houston Chronicle reported at the time. “Kirven, a junior from Mart, is no longer with the program due to a violation of team rules, a person with knowledge of the situation confirmed Monday. Kirven played in nine games as a freshman in 2018 and eight games in 2019, including five starts. After not seeing the field for the first three games this season, Kirven played in the last three, registering two tackles, including one for loss, in his final appearance on Nov. 14 against South Florida.”

As a senior in high school, Kirven caught 30 passes for 452 yards and 8 touchdowns while also racking up 127 tackles and 3 interceptions on defense.

Kirven was booked at the McLennan county jail on capital murder charges. The motive for the double murder is currently unknown.