The NBA Is Investigating Rockets’ Danuel House Jr. Amid Rumors That He Allegedly Tried To Sneak In An IG Model Into Bubble 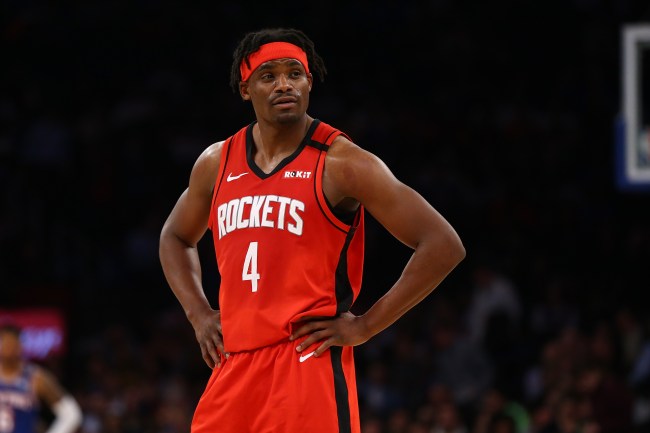 Houston Rockets’ Danuel House Jr. could be out for the remainder of the Western Conference semifinals against the Lakers for violating bubble protocols and there are some rumblings that it’s because he tried to sneak in an Instagram model into the bubble.

For the past few days, House has been mysteriously unable to play for non-covid related “personal reasons.”

Danuel House is out for personal reasons, Rockets coach Mike D'Antoni said. He said it is not COVID related.

On Tuesday night twitter user Cuffsthelegend, who is friends with several NBA players including LeBron James, implied that House was getting suspended for attempting to bring in an Instagram model who was not his wife or girlfriend into the bubble which is a clear violation of the bubble rules.

Woj & Shams will tell yall what Daniel House did. Just relax and wait for them to tweet it 🤣🤣🤣🤣

The NBA clearly said Wives & Girlfriends only. No random Internet Keister in the bubble 🤣🤣🤣🤣🤣🤣🤣🤣🤣🤣🤣

On Wednesday night, ESPN’s Adrian Wojnarowski reported that House was being investigated by the NBA for potentially violating “bubble protocol” but the league wouldn’t specify the reason why he was being probed.

Reporting with @ESPN_MacMahon: Houston Rockets forward Danuel House Jr.’s status for the remainder of the Western Conference semifinals is in jeopardy as the NBA probes a potential violation of bubble protocol. House has denied any wrongdoing to the league.

House was a late scratch for Rockets’ Game 3 loss to the Lakers due to “personal reasons” and is listed as "out" for Thursday’s Game 4 on the official injury report. Sources say league hasn't cleared him to play in Game 4 yet, but NBPA and NBA are discussing issue. https://t.co/VFY865aLlH

Houston Rockets forward Danuel House Jr.’s status for the remainder of the Western Conference semifinals is in jeopardy as the NBA probes a potential violation of campus protocol, sources told ESPN.

House, the Rockets’ sixth man, has denied any violation on a matter that has the league probing House’s activity within the team hotel, sources said.

House did not leave the perimeter of the campus, sources said.
Team and league officials have declined to specify the nature of House’s violation.

Update: Chris B Haynes is reporting that House allowed a female testing official into his room.

Of course, the Internet had jokes about the whole Danuel House situation.

“Just saw Danuel House try to sneak into the bubble with a female, y’all should go ahead and investigate that. Didn’t look like a wife.” pic.twitter.com/JKaERbzsPI

Yeah, I saw Daniel House trying to bring in this skeezy looking girl into the Bubble… https://t.co/CJfcBCWiAV pic.twitter.com/2H0vOHmBd3

Can't wait to hear about him from them pic.twitter.com/J7f9XgXhdq

The girl who danuel house snuck into the bubble getting ready to go on no jumper podcast pic.twitter.com/ToeIRQJ3Xr