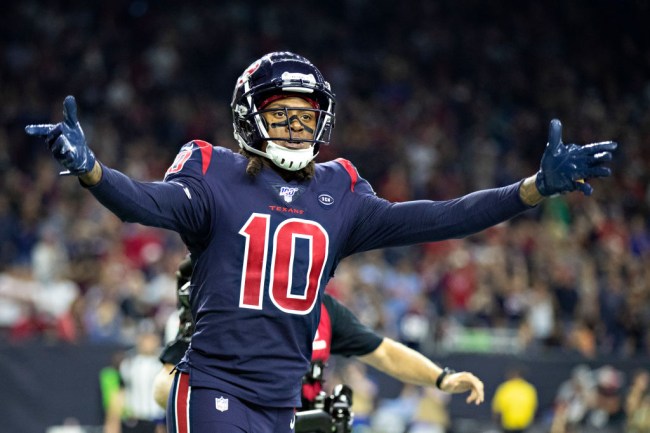 Deandre Hopkins could be on the trading block, at least that’s what Pro Football Talk’s Peter King is hearing.

With the legal tampering period underway as of Monday morning, plenty of pieces will fall into place all around the NFL, but the possibility of Hopkins being dealt from Houston could be something to keep an eye on as King reported that “two teams over the weekend” told him a move could happen.

Hopkins is only 27-years-old, a four-time Pro Bowler and without question one of the most talented wideouts in the league. So, the question of why would the Texans deal him is a valid one, and the answer is actually a pretty simple one.

As of this moment, the Texans don’t have a Top 50 selection for not only the 2020 NFL Draft but the 2021 NFL Draft as well. That’s not a great position to be in regardless of the fact that Houston has won the AFC South four of the last five seasons.

The Texans showed last season that they are not scared of making major moves as they sent Jadeveon Clowney to Seattle and acquired Laremy Tunsil from Miami which only adds to the speculation that they could trade away a player as elite as Hopkins.

While every team around the league would be interested in adding Hopkins, it’s tough not to imagine the Patriots being interested in at least inquiring about a possible trade. If New England could swing a move like that, one would imagine it would be a huge step in the right direction of keeping Tom Brady in Foxborough.