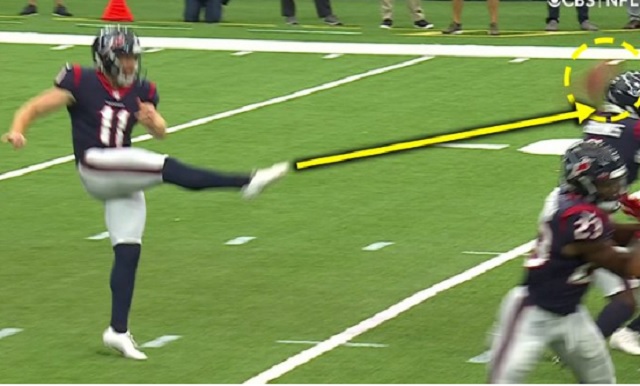 The Houston Texans are having some hilarious special teams issues against the Patriots on Sunday.

In the third quarter of their game, the Texans decided to get fancy and had several players changing positions while in their punt formation. Texans punter Cameron Johnston briefly moved up towards the line of scrimmage before moving back to his usual position. Unfortunately for the Texans, the play blew up in their faces when Johnston’s kick hit one of his teammates’ helmet and resulted in a zero-yard punt.

Never seen this before, the Texans essentially block their own punt. The punt hits the helmet of the up-man. This plus two missed extra points and Houston ST's has been horrendous #WeAreTexans #NEvsHOU pic.twitter.com/0lUZ2bvAja

Texans special teams have been horrendous. Two missed extra points. A punt for no yards that bounced off a safety's back. I don't think I've seen that in more than four decades of covering the NFL.