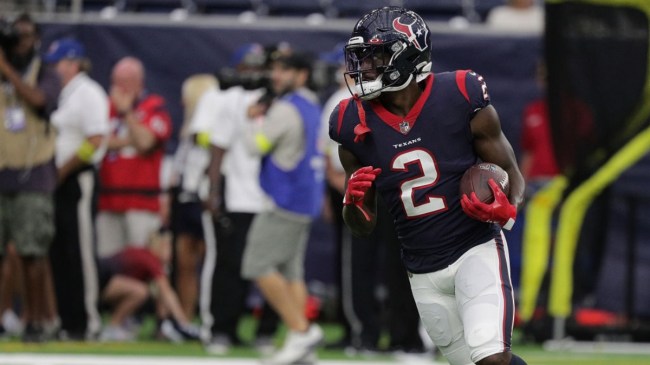 The Houston Texans appear to be looking toward the future at the running back position.

When the Texans drafted Dameon Pierce in the 4th round of this year’s NFL Draft, he entered a competition for the team’s starting running back job that also included veterans Marlon Mack, Rex Burkhead, Royce Freeman, and Dare Ogunbowale.

While he was expected to eventually claim the starting job from this group, many anticipated it taking him some time. That doesn’t appear to be the case as he has quickly become the favorite to start for the Texans in Week 1.

Now, despite being reluctant to name Pierce the RB1, the team has made a move that should just about guarantee he’ll be leading the backfield in Week 1. Today, Adam Schefter reported that the Texans would be releasing Marlon Mack.

Another surprise: Texans are releasing veteran running back Marlon Mack, per source.

Mack was a promising prospect out of South Florida who lived up to the hype in his second and third seasons. In those two years, he combined for 1999 yards and 17 touchdowns before the Indianapolis Colts drafted his replacement in Jonathan Taylor. Mack tore his achilles in Week 1 of the following season.

Many believed that injury signaled the end of Mack’s career as running backs rarely return anywhere near 100% after tearing their achilles. Mack overcame those expectations and appeared in 6 games for the Colts last season before signing with the Texans this offseason.

Now he’ll once again be on the lookout for a new home as the Texans turn to Pierce on early downs and likely make Rex Burkhead their receiving back.

Hopefully you got in on the Dameon Pierce hype train early in your fantasy leagues because he’s sure to fly up draft boards after this decision from the Texans.