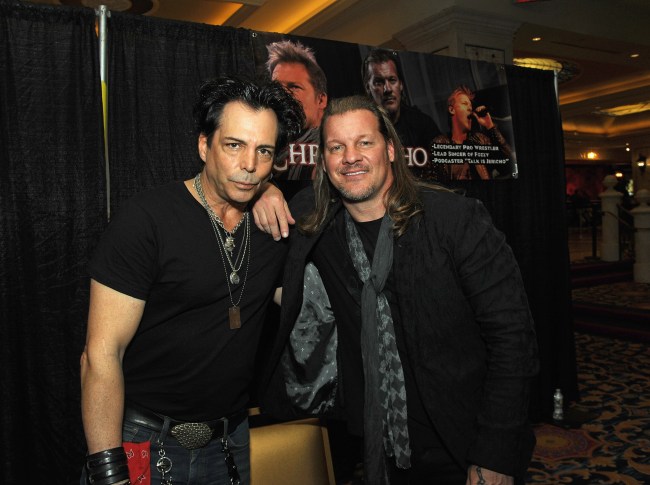 Six-time WWE Champion Chris Jericho is the current holder of the AEW Championship Belt. That wasn’t true earlier this week. Not because he didn’t earn that belt, he did, but because the belt was reported as lost or stolen.

The story goes that Chris Jericho landed in Tallahassee (via private jet) on Sunday and lost his AEW Championship Belt. He vowed to ‘scour the earth’ but according to Tallahassee.com all he needed to do was check the local Craigslist where his belt was listed under the ‘Lost & Found’ section.

The story begins with the guy spotting something in the middle of the street that looked completely out of place. It turned out to be the belt. Why was it in the street? That remains to be seen, I guess. But here’s a rundown of the events that led up to Chris Jericho being reunited with his AEW Championship Belt:

As they pulled into town on Highway 20, Price spotted what appeared to be a velvet bag in the middle of a turn lane near Capital Circle Southwest. The bag was scuffed up and contained something heavy, but the Prices didn’t take a peek inside until they got home. When he finally opened the bag, he couldn’t believe his eyes.

“I think I said something like, ‘Whoa, it’s a huge wrestling belt, check this thing out!’ ” Price said. “I never would have guessed that if I had a lifetime of guesses.” (via)

His wife Googled the item and found a bunch of replicas. She assumed it was one of those replicas that was purchased off of something like eBay. At no point did the couple assume it was THE REAL BELT in their possession because this was minutes/hours after the belt went missing and at that point there wasn’t any news yet about how the real belt was gone.

Figuring that this was a prized possession lost by some kid in the area, they listed it under the Lost & Found section of Tallahassee’s Craigslist:

Figuring the belt belonged to a kid or some other wrestling fan, Price listed it under Lost & Found on Craigslist Tallahassee. “I found a pro wrestling championship belt on hwy 20 Sunday afternoon,” the ad said. “Contact me with details and you can come get it.” He also texted photos of the belt to his brother and a friend.

He started getting replies Tuesday night. Some of them pointed to a Tallahassee Democrat article that detailed the belt that went missing after Jericho’s private jet landed at Million Air and the wrestling star took a limo ride to LongHorn Steakhouse on North Monroe Street for dinner. Jericho reported the $30,000 belt stolen that night.

But Price didn’t see any of the messages until Wednesday morning. When he realized what he’d found, he called the Tallahassee Police Department and was told to bring it in. He handed the belt over to an investigator in the lobby and answered questions about how he found it. (via)

While at the TPD the person met Mike Vaughn who owns Mike’s Limousines which is the car service that was responsible for transporting Chris Jericho to/from the steakhouse and the car service that was in possession of the belt when it went missing. They handed over a $200 reward for the missing belt which was nice but if we’re being honest that reward should’ve been $500 AT MINIMUM, probably a grand. This person saved that limo driver’s ass.

The TPD took a sworn statement from Price about the ‘purely coincidental’ meeting between Price and Vaughn that led to the $200 reward but Chris Jericho has since been reunited with the AEW Championship Belt:

BREAKING NEWS! @AEWrestling champion #ChrisJericho recovers the #AEW title belt HIMSELF, in less than 24 hours!! Awaits much deserved THANK YOU from the entire AEW fan base & roster… #LeChampion #ALittleBitOfTheBubbly pic.twitter.com/6IsuiuCfIv

I graduated from Florida State in Tally so it was kind of fun to be able to have a frame of reference for these streets/locations in the story. Not much happens in Tally outside of FSU.

For an in-depth rundown of all the events that took place, you can click here to read the article on Tallahassee.com.