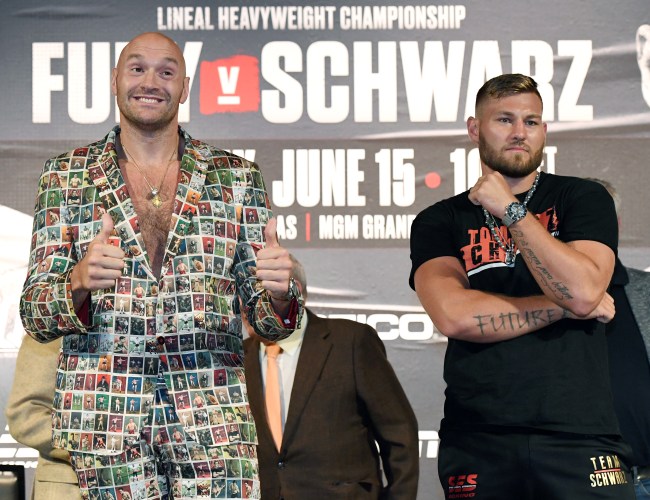 The NBA Finals just ended and the NHL’s Stanley Cup title is over, so, if you’re a sports fan, you might wondering where the hell you’re going to get your fill of awesome content this weekend, right? Well, don’t fret, because ESPN+ is here to solve that problem, providing two live events that you won’t want to miss out on.

For you boxing fans out there, you’re probably more than interested in one of the most intriguing heavyweight fights in a long time, with Tyson Fury taking on Tom Schwarz in a Top Rank event on Saturday, June 15th at 10 p.m. EST. The 30-year-old Fury, the Gypsy King, has a record of 27-0-1, with 19 KO’s, and is fighting for the first time since losing the heavyweight title late last year to Deontay Wilder — with a rematch between the two upcoming.

Prior to a showdown with Wilder down the road, though, Fury has to deal with 24-year-old Tom Schwarz, who, at 24-0 with 16 KO’s, isn’t someone he should overlook. While Schwarz says it’s a  “dream come true” to fight against Fury, he, no doubt, will be looking to keep his unblemished record intact.

As for you soccer fans out there, with Copa America beginning on Friday, June 14th and running through July 7th, the tournament is airing exclusively on ESPN+. Bringing complete coverage of the tournament, as well as giving fans stars like Lionel Messi of Argentina and teams like Brazil and Uruguay, the widely-anticipated tournament also features the following countries: Bolivia, Venezuela, Peru, Colombia, Uruguay, Ecuador and Chile.

Plus, here’s a friendly reminder that ESPN+ is just $4.99/month, or $49.99/year, so it’ll cost you a cup of coffee to take in your favorite sports content anytime you want to.

Plus, for all those hardcore UFC fans, don’t forget about all the exclusive UFC programming that ESPN+ has for you to watch, with the streaming service serving as the exclusive home to the UFC. Here’s some of what you can expect with your subscription.