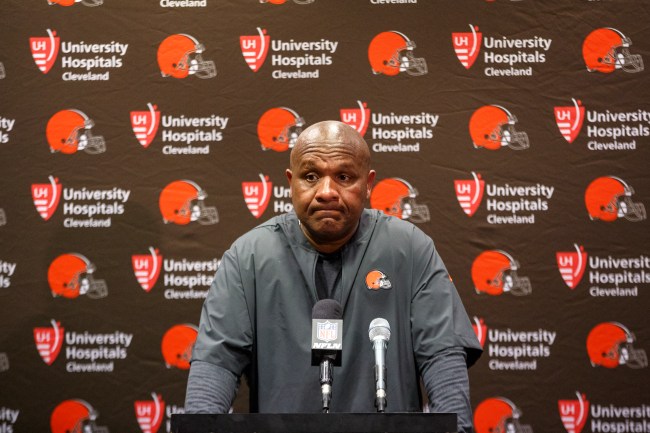 Hue Jackson is a good football coach, just not a good head football coach. Going an embarrassing 3-36-1 in his two-plus seasons as head coach of the Cleveland Browns, Jackson has been the butt of jokes everywhere for how f*cking miserable he was while at the helm. Making matters worse, once the Browns canned his ass halfway through the season, the team went 5-3 under interim head coach Gregg Williams, and No. 1 overall pick Baker Mayfield had the look of a Pro Bowler, which, no doubt, helped him earn Offensive Rookie of the Year honors. Yep, it was a sad few years for Hue Jackson.

Well, since the NFL is a fraternity and coaches get recycled worse than Kardashian sisters with pro athletes, Hue Jackson will inevitably get hired again for a coordinator position at some point. And, after the Arizona Cardinals decided to interview him, Jackson may get that chance this upcoming season.

The decision to just bring in Hue Jackson for an interview already sent shockwaves through social media, with football fans absolutely torching the new head Cardinals head coach, Kliff Kingsbury, for even considering the guy. Take a look at how deep Twitter went to roast the news of Jackson just talking to the Cardinals.

Good luck with that. pic.twitter.com/a7UZvu9hk3

Dear @AZCardinals DON'T DO IT. Hire me and I'll do better than Mr. 3 wins in 3 years. https://t.co/jBMXboNahV

Hope Kingsbury keeps his resume up to date. With Hue involved, he’ll be job searching again this year

Did u seriously just say his experience as a head coach would be valuable hahaha pic.twitter.com/ODTWMWeJSD

Clearly, given his track record over the past few years, Hue Jackson doesn’t seem to be a great candidate for a team that just finished a season that included three victories, firing their head coach — and hiring a college coach, Kliff Kingsbury, who was 35-40 overall at Texas Tech — and snatching up the No. 1 overall pick in this year’s upcoming NFL Draft. But, hey, if the team wants to bring on Jackson because it’ll lead to, uh, some sort of mentorship for Kingsbury, I guess that’s their problem. Is weed legal in Arizona, because that’s the only reason I can find for this to even be a possibility.