Fired Browns Coach Hue Jackson Getting Ripped For Blaming Everyone But Himself For 2.5 Years Of Crappy Football 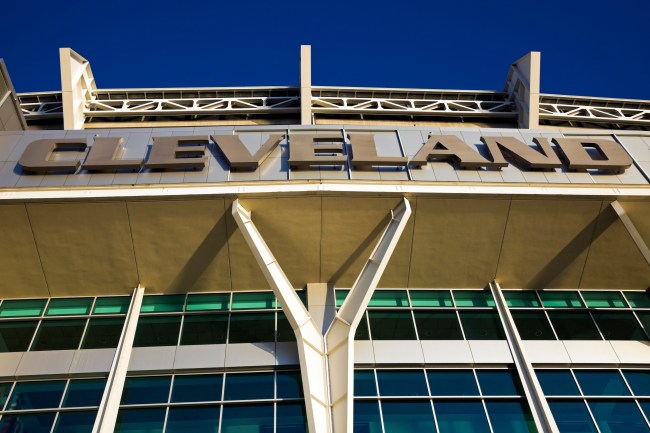 Hue Jackson is a terrible head football coach. There, I said it. Sure, the Cleveland Browns front office set him up for failure a couple of years ago by going all analytics on him, but, c’mon, ol’ dude went a combined 1-31 in his first two seasons at the helm, and lost in disheartening ways this season before he finally got canned with the team sitting 2-5-1.

Yes, it took a three-game winning streak in a season of higher expectations for the Browns to fire Hue Jackson, not one win in his first 32 games, just wanted to remind you of the dysfunction that is the Cleveland Browns.

Anyway, with Jackson and his then offensive coordinator, Todd Haley, both getting axed due to what was called “internal discord,” the Browns have now promoted defensive coordinator Gregg Williams to lead them. And, talking for the first time with the media since losing his job, Hue Jackson seemed to point the finger at everyone but himself — and the Internet is sort of rolling their eyes at him.

Speaking to Cleveland.com, here’s a quick transcript of what Hue Jackson had to say.

Was he blindsided by the firing? “I was surprised when both Jimmy and John walked in my office and let me know that they’d be relieving me as being the head coach of the Cleveland Browns.”

Was there internal discord? “I didn’t perceive it (that way). I think you can disagree with people and not have it be discord. Discord to me is a strong word. It means there’s always infighting. That’s a pretty hot word. I know there was disagreements and rightfully so. Who doesn’t disagree? But I think the term internal discord was a little much.”

Did he appeal to Haslam to let him run the offense? “I had a very candid conversation with Jimmy Haslam as I’ve known Jimmy longer than I’ve know John, and I think Jimmy knows what I’ve expressed and how I felt and how I would have liked to have gone out.”

The entire interview is laughable, with the former Browns coach acting as if he was headed for Canton or something, yet, again, finished his career in Cleveland with a 3-36-1 record. As you might expect, once Hue Jackson’s words reached the Internet, well, people mocked his ass pretty hard.

Hue Jackson is that guy in your fantasy league who yells out “I was gonna take him” after every single pick at the draft.

And @MaryKayCabot writes that Hue Jackson did this exclusive interview as he “read from some of his own notes.” So this isn’t just stuff that came out in the heat of the moment, or that he was led into saying; this is what he PREPARED and PLANNED to say.

Hue Jackson might be the most insecure person in the universe. these are the ramblings of someone desperately seeking validation and, honestly, it’s sort of sad https://t.co/iBxpfsgjov

A SECOND AND A THIRD ROUND PICK.

Great stat from ESPN: In order to match Hue Jackson's career winning percentage of .205, Bill Belichick would have to lose his next 867 games — 54 seasons worth.

Two positives I heard about Hue Jackson when he was hired by the #Browns:
1. He knew AFC North teams
2. He developed QBs

Reality:
1. Hue was 1-13-1 in the AFC North
2. Every QB he worked with got worse (Kessler, Kizer, RG3, McCown, Hogan, TT, Mayfield) pic.twitter.com/gfaUTmUeDs

Hue Jackson: ‘I was not given the opportunity to display what I could do as a play-caller’ https://t.co/2Xr33xKWuM pic.twitter.com/SREXkpdT3U

My favorite part of Hard Knocks this year was when Tyrod Taylor was teaching Hue Jackson how to coach pic.twitter.com/BKtHxPPugF

Look, Hue Jackson will probably get another gig as an offensive coordinator or something down the road. He seems like a likable guy, unlike the malcontent Todd Haley who has clashed with people in the past, but, good lord, that record as a head coach suck ween. Plus, he didn’t really do himself many favors by blaming everyone else but himself for how crappy the Browns were while he was leading them.

Ah, yes, the Cleveland Browns, everyone: the factory of sadness where careers go to die.