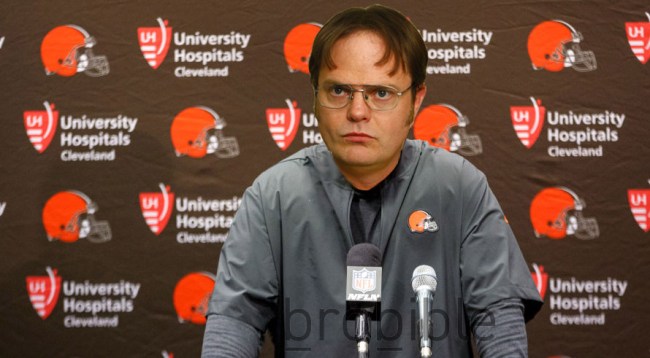 Well, that didn’t take very long. Almost immediately after Hue Jackson was named Special Assistant to Marvin Lewis and the Cincinnati Bengals did the Dwight Schrute memes begin rolling in on social media.

In case you missed it, here’s the “real” news via Sports Illustrated…

Former Browns coach Hue Jackson has been hired by the Cincinnati Bengals as part of head coach Marvin Lewis’s coaching staff, the team announced Tuesday. Jackson will serve as a Special Assistant to the Head Coach.

The Bengals hired Jackson one day after relieving Teryl Austin of his duties as defensive coordinator. Lewis will take over coordinating the defense, the team announced Monday. Jackson is also expected to help with those respective duties.

About the hiring, Lewis said, “I have a great comfort level with Hue and his ability to assist me with the day-to-day responsibilities on defense, including analyzing our opponents and helping me on game days with the players and defensive coaches.”

Jackson, who went 3-36-1 as head coach of the Cleveland Browns before being fired at the end of October (his replacement Gregg Williams took all of two games to win a third as many games with the Browns as Hue), said he looks forward to “doing my part to help it finish the season strong.”

But really, none of that matters to anyone outside of Cincinnati. The rest of America only cares about Jackson’s new job title as Special Assistant to Marvin Lewis and the similarities it bears to Dwight Schrute’s title as the Assistant to the Regional Manager.

Sounds like Hue Jackson got hired as assistant to the regional manager for the Bengals. pic.twitter.com/9IEzP4Tk9P

Congrats to Hue Jackson on being named Special Assistant to the Head Coach today in Cincinnati. pic.twitter.com/EwYLBvXAct

HUE JACKSON is the PLAN??!! pic.twitter.com/z2krHkP3w5