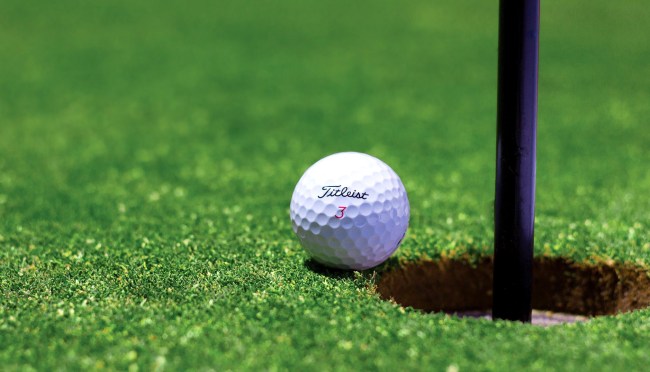 Welp… guess I was mistaken. There was a little bit of luck left over this week after that guy won $800,000 after accidentally buying the wrong lottery ticket.

Turns out, despite the odds being around 26 million to 1, husband and wife Steve Howe and Carolyn Barnett-Howe were able to snatch up enough of it to hit back-to-back holes-in-one.

Wait… there’s more. What are the odds of a husband and wife hitting back-to-back holes-in-one from the same tee box… using the same damn club?

That’s got to be like a billion to 1, right?

“That was a moment for sure,” Carolyn told Wisconsin.Golf. “I have never been an athlete that pointed to the sky; I have always thought God was busy with more weighty issues. That being said, I do acknowledge that He is in control. I think He was bored the other day and said to the angels, ‘Hold my beer.’ … It was certainly fun!”

Steve, 69, and Carolyn, 57, made the feat even harder thanks to the Styrofoam collars inside the hole because of the ongoing pandemic, which meant his golf ball was already sitting there, visible, when she scored her ace.

“We could see both balls go in from the tee,” said Steve. “We’ve got those Styrofoam pool things in the cup, so you could see both balls. Half the ball was above the lip of the cup. I had a yellow ball, she had a white ball. Of the 10 holes-in-one I’ve made, that was only the second time I actually saw the ball go in the cup.”

Oh yeah… they were also playing in a best-ball event at the time.

Annnd… after he hit his ace, Steve told Carolyn, “You might as well put it right on top of mine.”

“We would have thrown a real nice party afterward, but the clubhouse is closed for the coronavirus social distancing, so we couldn’t do that,” Steve told Golfweek.com. “But when everything gets back to normal, we’ll put on a little bit of a party for everybody.”

For Steve, it was his 10th career hole-in-one and for Carolyn, it was her fifth.

How nice for them.