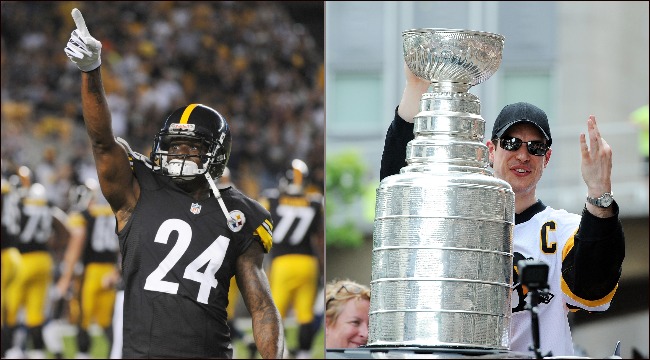 The Penguins and Steelers both brought hardware back to the Steel City, and less than a year later Wiz Khalifa released capital B Banger ‘Black and Yellow,’ a fight song so electric, I briefly looked at one-bedrooms outside of PPG Paints Arena.

As fans, winning championships is different sports in the same year is Bliss, but do pro athletes in these cities feel the same way? Is there a ‘One Sheriff in Town’ mentality or is a happy city good for everyone?

We recently sat down with Pittsburgh Steelers legend and two-time Super Bowl champion Ike Taylor to find out.

The short answer: Ike would be Penguin Pete if his biceps could fit in the suit.

“I knew when the Pittsburgh Penguins got Sid the Kid it was a wrap. It was like, ‘How is he so special??’

Then you see the man live and in-person, and how explosive and how smooth and what he can do with that puck. It’s like, oh, so everyone else is in slow motion and Sid the Kid is gliding on that ice, going past everybody.  By the way, he can stop on a dime. He can shake you, he can cross you over on the ice. I ain’t even know people could get crossed over on the ice. I thought that was just in basketball.”

There's just no way we could forget this Sidney Crosby magic. pic.twitter.com/Oi6UkM3LDj

“He’s good at assisting players and he’s good at getting goals. We got something special. [The team] came around Sid the Kid. They did a hell of a job.

So we knew when the football season was over and even a little bit during the football season, we would go an support the hockey team. It’s nothing but football on ice and them guys was going at totally different speeds, so you got a newfound respect because you can hear the collision. You see how fast they’re going. They’re like some real-life, hard-nosed MMA guys, but they just happen to play hockey.

You just get a newfound respect for the sport for me that I didn’t even know. But just embracing the city and what they had to offer, it was like, dang man this is cool.

So we all just became a family. We all became one. It wasn’t football or hockey. It’s a City of Champions and that’s how we looked at it.”