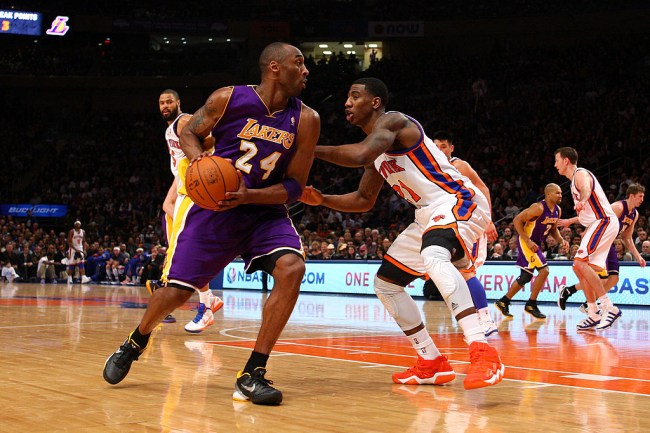 Imagine being an NBA rookie and being tasked with attempting to guard Kobe Bryant? Especially when Black Mamba dropped 61 points two seasons earlier in the same building, you would have go against him. That was the monumental defensive assignment that Iman Shumpert faced in his rookie season.

On February 9, 2012, the Los Angeles Lakers played the New York Knicks at Madison Square Garden. Iman Shumpert, who is an incredibly gifted defender, accepted the challenge of guarding Kobe Bryant. Everything was going as well as possible for Shumpert, and then the fourth quarter happened.

Bryant was known for his bullish competitiveness, and it showed up in the fourth quarter of the game against Shumpert. Following the tragic death of Kobe Bryant in a helicopter crash in late January that took the lives of eight others, including his daughter Gianna, Iman shared an amazing Black Mamba story.

Shumpert was recently on the Ebro in the Morning radio show, where he told a classic Kobe Bryant story. Shumpert, who is currently a free agent, told the tale of how he locked down the legendary Kobe Bryant for three quarters and then got torched in the fourth.

“But I’m looking, I swear I looked at the clock like, ‘There’s 12 minutes left – what are you talking about? What was that? Man, you haven’t said anything the whole game; I’ve been talking shit, I stole the ball, I’m hyped as hell… it’s Kobe Bryant. He [didn’t say] one word to me,” Shumpert said on the Hot 97 radio show.

“He came, shot fake, shot fake, threw it off the glass, caught it, threw it to the corner,” Shumpert said of Bryant’s off-the-backboard pass to himself and then found Pau Gasol open. “I’m like, ‘Bro, what you on? Like, ‘Bro, you’ve been regular all game.’ Shot, get to the spot, shot fake, then pivot over here, drop it off the glass. Then I’m like, ‘Bro, what is going on?’ He pulled up from like 35 feet on some Steph Curry shit before Steph was doing that. He pulled up and laced it.”

Some NBA fans questioned if Shumpert was telling the truth, but then he hit them with the video of Kobe dominating the Knicks in the fourth quarter. “Lemme know when I tell y’all a lie,” he captioned the highlight reel of Kobe at MSG.

Lemme know when I tell y’all a lie https://t.co/r5N1AhkIMJ