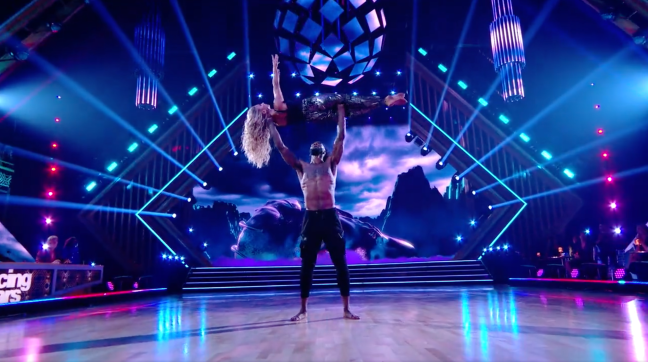 Dancing With The Stars on ABC

Former 10-year NBA veteran Iman Shumpert has serious dance moves. The 6-foot-5, 212-pound shooting guard has been competing on the current season of ‘Dancing With The Stars’ and is on to the finals.

Shumpert and his professional partner Daniella Karagach earned a perfect score for their contemporary dance earlier this year and have not stopped putting on incredible performances week-in and week-out. Now they are one of four remaining finalists.

The duo performed two dances in the semifinals— one was a tango, and the other was a jazz routine. They earned 75 out of 80 possible points for the combined performances.

The tango, set to Lady Gaga’s ‘Telephone,’ was up first. For someone of Shumpert’s stature, he is incredibly nimble.

Iman Shumpert and Daniella Karagach dance a redemption Tango to “Telephone” by Martynas on the Dancing with the Stars Semi-Finals! pic.twitter.com/DzZKFlKjV4

It was followed by a jazz routine to Kanye West’s ‘Dark Fantasy.’ The athleticism that Shumpert possess allows him to do some pretty incredible stunts that very few, if any, “Stars” have ever performed.

Iman Shumpert and Daniella Karagach dance Jazz to “Dark Fantasy” by Kanye West on the Dancing with the Stars Semi-Finals! pic.twitter.com/YyDKq7UiO3

In the finals, Shumpert will face three other duos. Also in the finals are Peloton instructor Cody Rigsby, entertainer JoJo Siwa and TV personality Amanda Kloots.

Of the remaining “Stars,” Shumpert is very much in the mix. He will compete for the Dancing With The Stars title on November 22nd.