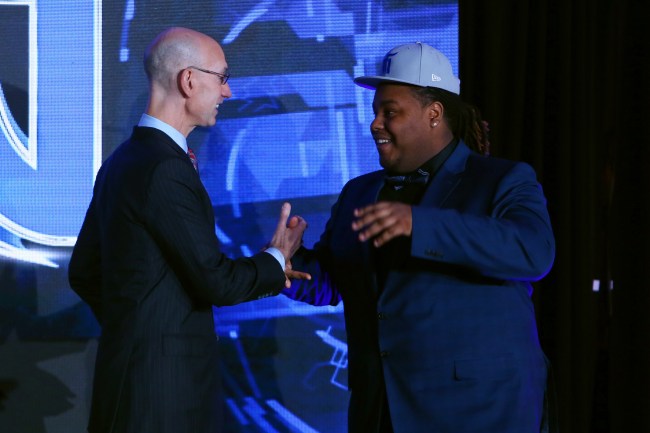 The NBA 2K League held its inaugural draft on Wednesday, at the Hulu Theatre at Madison Square Garden. 102 gamers were selected by the league’s 17 participating franchises, with NBA Commissioner Adam Silver introducing the 1st overall selection; Artreyo “Dimez” Boyd, selected by Mavs Gaming. First round selections will sign 6-month contracts worth $35,000, with the balance of the league’s players taking home a base salary of $32,000 annually. All players will receive room and board, medical insurance and a retirement plan. The teams, each consisting of 6 players, will compete for their share of $1 million prize pool. Game locations, the number of games to be played and the number of teams that will qualify for the playoffs, are among the details that still need to be worked out.

Howie Long-Short: The NBA 2K League is a collaboration between the NBA and Take Two Interactive (TTWO), the publisher of NBA 2K franchise. The company’s Q3 ’18 earnings report was highlighted by a reported +64% YoY increase in recurrent consumer spending (32% of total net revenue) and an 8% increase (to $258.4 million) in digitally delivered net revenue (54% of total net revenue). It’s expected that the increased exposure generated by the 2K League will increase both recurrent spending on the game and game sales in fiscal 2019. It should be noted that NBA 2K was the 2nd best-selling video game of 2017 in U.S.

Fun Fact: NBA owners have taken the biggest leap into the esports space (projected to approach $1 billion in revenue this year), with 13 ownership teams having invested in or acquired teams. For comparison purposes, just 6 MLB ownership groups and 3 NFL owners maintain an equity interest in a competitive gaming franchise.

Fan Marino: 0 of the 102 gamers that made up the league’s inaugural draft eligible player pool, were female. While a bad look, it certainly wasn’t a conscious one by the league. Tryouts were open and gamers were not asked to disclose their sex until after the combine. Commissioner Silver said that the league has launched an initiative focused on the recruitment and development of female gamers; they’ll also work to gain an understanding of gender disparities in competitive gaming (just 1 female finished among the combine’s Top 250 performers).

The Atlanta Braves, Oakland A’s and Seattle Mariners are the latest MLB teams to implement CLEAR’s “smart access pass”, a free membership service that offers fans expedited entry into the stadium (note: there is a $179 fee for their airport service). CLEAR technology uses biometric data (finger print, iris image etc.) to confirm an individual’s identity, speeding up the security process; with members funneled to express entrance lines. While currently known as a gate security company, CLEAR is pursuing a future where their platform uses a single biometric ID to power the entire in-stadium experience; from ticketing to alcohol and concession sales.

Howie Long-Short: CLEAR, said to be “building a connected world that’s smarter and more secure” through its biometric identity platform, services nearly 2 million members across 34 sports stadiums and airports nationwide. The company is certified as a Qualified Anti-Terrorism technology by the U.S. Department of Homeland Security. A privately held subsidiary of Alclear (acquired in ‘10 for $5.9 million), CLEAR has raised $35 million since October 2015. There are two ways to play the privately held company, with both T. Rowe Price (TROW, led 2 rounds) and Delta Air Lines (DAL, led the 3rd round) having invested. TROW was the sole investor in the company’s most recent round ($15 million, closed in April 2017).