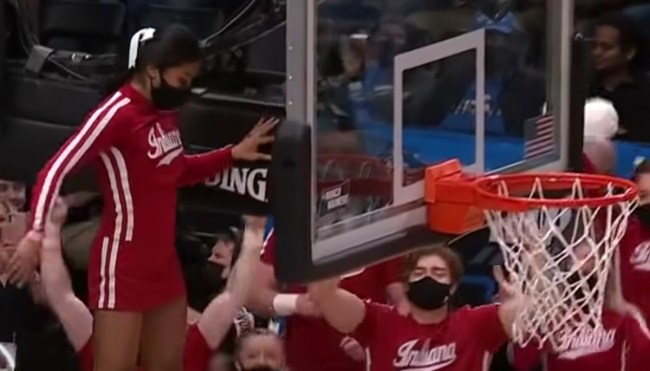 The NCAA Tournament has been filled with the madness we’re promised every time March rolls around: St. Peter’s has mounted a Cinderella run after shocking Kentucky in the first round, Arizona narrowly missed pulling off a wild play to secure a win over TCU in regulation, and at least one double-digit seed has been guaranteed a spot in the Elite Eight courtesy of Iowa and Miami.

However, what has arguably been the most electric moment of the tourney so far had nothing to do with the action on the court. During the first-round matchup between Indiana and St. Mary’s last week, things hit a bit of a snag shortly after the second half kicked off when a basketball managed to get stuck on top of the backboard.

It seemed like a pretty simple issue to solve, but after it became clear there was no contingency plan in place, Indiana’s cheerleading team stepped up in the clutch, as Nathan Paris gave Cassidy Cerny a boost so she could retrieve the ball and allow play to resume.

Now, it appears Cerny is cashing in on her 15 seconds of fame, as Darren Rovell reports she landed a name, image, and likeness deal with an apparel company that’s selling a shirt inspired by her One Shining Moment.

Indiana cheerleader Cassidy Cerny, who famously plucked the ball out during the game, has struck an name, image and likeness deal with @BreakingT.

The shirt is inspired by announcer @AndrewCatalon’s call of the moment. pic.twitter.com/TvvDQC9xDk

Some college quarterbacks have been making sure their offensive line is taken care of after signing endorsement deals, and I can only hope Cerny gives a cut of what she’s making to Paris.

It’s the least she can do.