Indiana Fans Chanted ‘Overrated’ And Ripped Off Bleachers In The First Quarter, And Then Lost 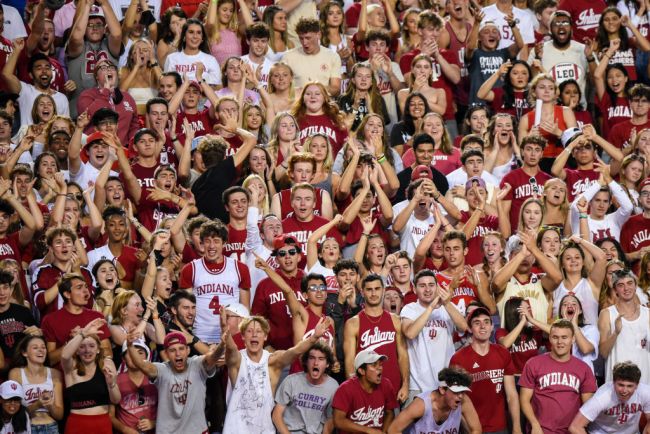 Indiana football has what is arguably its biggest game of the season today. The Hoosiers are 1-1 and if they want to have any chance at the College Football Playoff or a New Year’s Six bowl game, they can’t afford more than one more loss— if that.

On the other side of the ball, an undefeated Cincinnati team cannot afford to lose this season if it wants to make a case for the Playoff. Thus, it is a massive matchup in Bloomington.

The heat was on, literally.

The first three possessions of the game resulted in a punt. Cincinnati quarterback Desmond Ritter then threw an interception that set up Indiana around midfield.

Six plays later, the Hoosiers found the end zone and fans went bananas. The student section was so fired up that they ripped out a bleacher plank from the stands.

Indiana 7, Cincinnati 0 only 9 minutes in.
Apparently the new tradition at Memorial Stadium is tearing out one bleacher plank every game. Happened last week.
Great way to turn it into a Standing Room Only event, I reckon. pic.twitter.com/wvu7ENqewb

THEY RIPPED OUT ANOTHER BLEACHER. pic.twitter.com/g1xCBoLBHT

Ritter got the ball back and went three-and-out on the next possession. He would have thrown an interception but it was caught by an ineligible defender— Indiana’s head coach Tom Allen.

After Indiana’s defense forced Cincy off of the field again, the fans in attendance began to chant “overrated” at the No. 8 team in the country.

Indiana fans chanting overrated up 7-0….in the 1st quarter….did I hear that right? pic.twitter.com/rka5oK5nFW

While the confidence is incredible, getting an “overrated” chant started with more than 50 minutes remaining in the game is a bold move. There was a lot of game left, but the Hoosiers did take a 7-0 lead into the second quarter.

No. 8 Cincinnati trailing Indiana 7-0 after the first quarter.

The crowd was LOUD.

Indiana gets a big third down stop early in the 2nd quarter #iufb pic.twitter.com/0FF3hpBleZ

But, in the end, Indiana lost. Cincinnati won by two touchdowns, remains undefeated, and is not overrated.