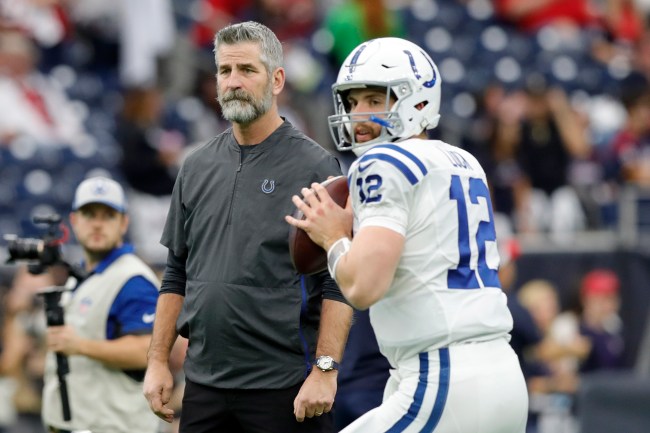 The Indianapolis Colts officially have a quarterback problem. While most of us already figured that to be the case after the shocking retirement of Andrew Luck last weekend — thrusting Jacoby Brissett into the starting role — the team has made it even more obvious over the past day or so, with reports coming in that the AFC South team is working out a number of washed up signal-callers to serve as backup to Brissett.

When I say washed up, I mean really, really washed up, because, per Ian Rapoport of the NFL Network, the Indianapolis Colts are working out guys like Matt Cassel, Brandon Weeden and Brock Osweiler; all of whom don’t have the greatest track record of playing in the NFL. Take a look at some of the details from Rapoport’s report.

This past week, as the #Colts look at options for their backup QB job, they visited with and worked out FA QBs Matt Cassel, Brandon Weeden, and Brock Osweiler, I’m told. No decision yet on who they are signing, or if they’ll wait until roster cuts come from the other 31.

Yikes, those are some shitty options. But, hey, the Indianapolis Colts just need some sort of experience behind their new starter, Jacoby Brissett, so one of those three can provide that — even if it hasn’t been a positive experience with any of them under center.

Meanwhile, once Twitter got word of Rapoport’s report, they had some fun reactions to the news. Take a look at what some were saying about the current state of the Colts’ quarterback situation, and the names they’re identifying as possible backup solutions — with Johnny Manziel even being floated around out there by social media.

What in the name of Goodwill is this?

They squandered 20 years of having 2 of the best QB talents of all time and now the football Gods are going to shit on them.

So why do the Indianapolis Colts even need a backup QB? Well, because the current one, Chad Kelly, is suspended for the first two games of the regular season for violating the NFL’s personal conduct policy. While he may be counted on after serving his punishment from the league, the team — which reached the playoffs last season and have hopes to get back there — probably needs someone with a little bit more experience to serve as security behind Brissett.

Somewhere, Colin Kaepernick’s reading all this shaking his head and wondering what in the hell he has to do to even get mentioned for a tryout. Sure, the former 49ers quarterback has some baggage with his quiet protest by kneeling during the National Anthem, but, on the field, he’s got a lot more talent than any of the names the Colts are currently working out as a backup plan. Just my two cents.