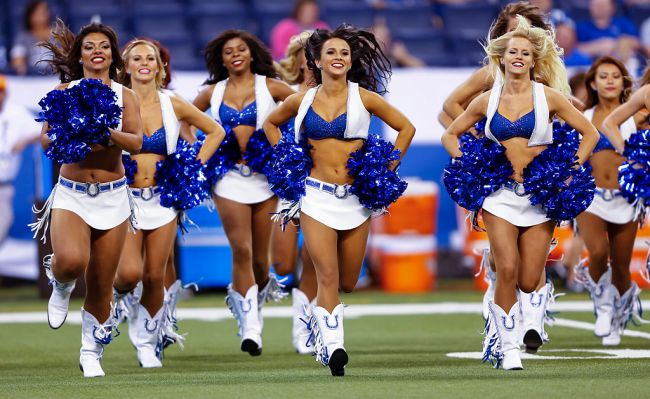 Returning punts in football is a lot harder than it looks. Finding a good line, getting a read, setting up under the ball and hauling it in is not easy.

Even Ezekiel Elliott, one of the top running backs in the NFL, struggles mightily with the task. There is a reason that punt returners are typically in their own “position category” on the professional level.

As the Indianapolis Colts look to fill that position in 2021, the front office should not consider the majority of its cheer squad. Colts cheerleaders recently took the field after training camp to field punts off of a jug machine and it did not go well for all but one of the women.

Breaking down the tape.

The sequence starts off with Kyleigh, who comes in far too timidly and turns away from the punt as she tries to pull it in, shrieking and falling to the ground unsuccessful. Katie goes second and her effort is better, but her line is way off and she can’t field the punt.

Cassidy, who is the third to go, changes the narrative. After overrunning the high-arching punt originally, she comes back to the ball and goes full-extension for an incredible catch. If the Colts do include their cheerleaders in the fall camp competition, Cassidy is the frontrunner to make the roster. She was pumped and rightfully so.

Alyssa, aka “Twinkle Toes,” follows Cassidy. She uses some quick feet to get in ready position but completely misreads the punt and it goes flying over her head.

Madison proceeds to take the open-arm approach. Her effort is one of the best, but she too was unsuccessful.

Kaityln takes a great line. She just can’t hold onto the ball as it hit her in the breadbasket. Sammy then overruns the route and the ball goes through her over-head stretched arms.

Leand gets awfully close. She makes a great run, sets a wide base under the ball and hauls it in… momentarily. She dropped the ball right out of her arms. So close.

Abby never stood a chance but gave a great attempt to go up and get it. Jada also looked lost but did her best to snag the punt.

Coach Erin stepped up next and was simply overwhelmed. She was in the mix until the couldn’t hang on and fell.

Last, but not least, Coach Kelly was ready to go. She had her gloves on and everything. The ball, which had been all over the place for the other girls, landed right in front of her and virtually right into her arms. It was a great catch and she held on, but she had the easiest ball of them all.

In total, the Colts cheerleaders and their coaches caught two of 12 punts. It was very funny and the women seemed like they had a great time.