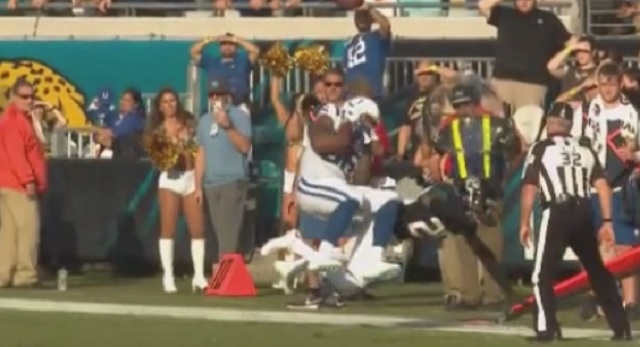 The Indianapolis Colts lost to the Jacksonville Jaguars but there was a bit of controversy at the end of the game.

With about 5 seconds left in the game, Andrew Luck passed the ball to tight end Erik Swoope near the sideline.

Swoope was eventually tackled and forced out of bounds by Jags cornerback Jalen Ramsey. Officials on the field then ruled to keep the clock running because Swoope’s forward progress had been stopped in-bounds before Ramsey knocked him out.

Forward progress call ruled on the last play at the sideline against IND. Contact was in bounds and drove the player out of bounds. Therefore the clock runs. Forward progress is not reviewable

NFL referee Alex Kemp confirms the final play was dead when the official determined forward progress had been stopped in-bounds. Did not matter that he landed out of bounds.

Steratore gave an incredible answer on the last play in JAX/IND game. Forward progress being stopped means a running clock but he admitted that in a late game situation this important it would have to be overwhelming and he’d have stopped the clock.

NFL fans weren’t happy with the call on the field.

No player has ever been ruled down by forward progress at the sideline with two seconds left. Ever.

HOW WAS THAT NOT OUT OF BOUNDS?!

By the book…that's probably a correct call. Swoope was hit backwards before falling out of bounds. Is it ever called like that? Virtually never. Only when his body falls in-bounds do they run clock.

That Colts ending was bs… dude was clearly out of bounds

The out of bounds call was awful but the #Colts lost this game themselves. I like Reich but there’s a time to go on 4th dwn, then there are times when it’s just dumb to do. This isn’t hindsight either, you take the damn points. With 9 secs left & no TOS throw to the end zone.