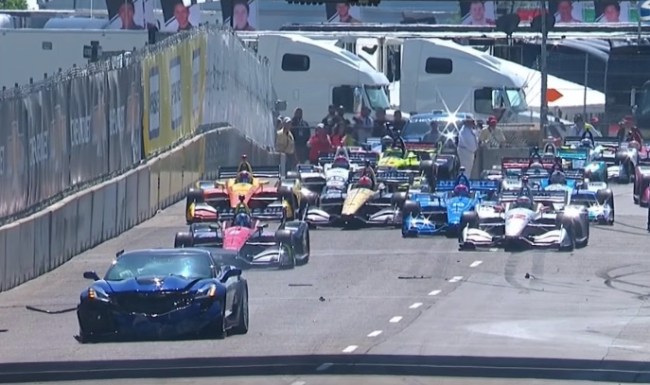 An executive for General Motors had the honor of driving the pace car before the 2018 Detroit Grand Prix IndyCar race yesterday. He led the race car drivers out on the first lap in a Chevrolet Corvette ZR1 worth around $123,000 and all was going well for a short period of time until he lost control of the car, the back end swung around, and he slammed into a concrete wall on the second turn which delayed the race as emergency cleaning crews needed to clear the track of debris.

The airbags deployed and neither the driver nor the passenger sustained serious injuries. In an effort to explain the situation, Chevrolet released a statement about contributing factors and how the car’s safety precautions performed as expected (via IndyStar):

Chevrolet said, “It is unfortunate that this incident happened. Many factors contributed, including weather and track conditions. The car’s safety systems performed as expected.”
Reuss is far from an inexperienced pace car driver. In fact, he has driven the pace car on the streets of Belle Isle on multiple occasions. According to an IndyCar official, he has been trained and attained certification to drive high-performance cars such as the Corvette ZR1.

The driver of the vehicle was Mark Reuss who is General Motors EVP of Global Product Development as well as Purchasing and Supply Chain. This is a man who spends every waking hour in the auto industry, so I think it’s safe to say that this embarrassing moment is going to haunt him in the boardroom and on the golf course for years to come.