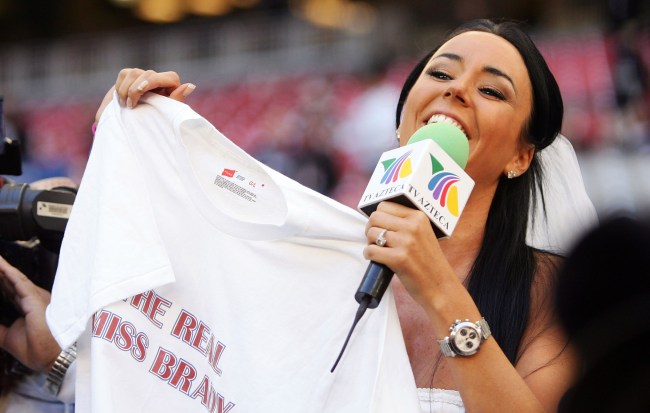 A Mexican television host, Ines Gomez Mont, who became internet famous back in 2008 when, while wearing a wedding dress, she attempted to ask Tom Brady to marry her at Super Bowl LII Media Day, is on the lamb after allegedly stealing almost $150 million.

The former host of TV Azteca’s Los 25+ and co-host of Ventaneando got her job as a TV show host after acting on a 1997 telenovela Tric Trac.

Since then, Ines Gomez Mont did actually get married, and have six children, with a lawyer named Víctor Manuel Alvarez Puga, who was also named in an arrest warrant issued by a federal judge in Mexico.

The couple are reportedly on the run for embezzling around 300 million pesos from Mexico’s Ministry of the Interior. People states “local outlet TVNotas reported that the couple had fled the country upon learning that they were being investigated.”

The orders — more widely known as red notices — would allow authorities across the world to help track the couple’s location.

Writing on Instagram after the warrant was issued, Gomez Mont stated, “This afternoon various media reported on an arrest warrant issued against me, my husband, and other people.

“We have not had access to that order or to the evidence that justifies it.” she continued. “Only to press reports with partial and maliciously leaked information.

“To those who have sent us their expressions of support, I thank you with all my heart. Know that we are preparing to face this process and we will exercise all of our rights.

“I will keep you informed about this sad and painful situation. Thank you for your love and God bless you.”

Gomez Mont and Alvarez Puga have been officially charged with money laundering, operations with resources of illicit origin and embezzlement, and reportedly face between 20 to 60 years in prison if convicted.