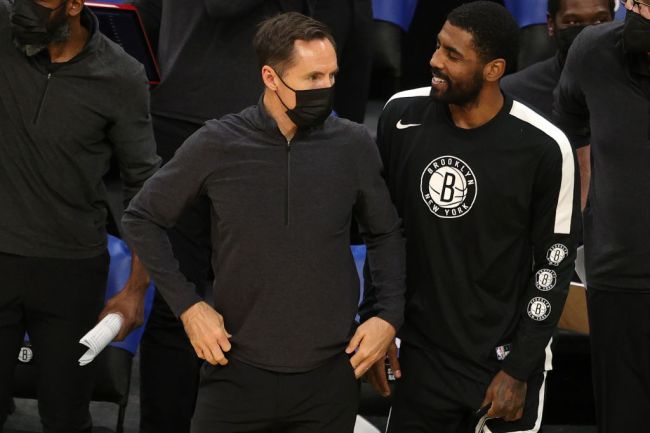 “I think we recognize he’s not playing home games. We’re going to have to for sure play without him this year. So it just depends on when, where and how much.”

Steve Nash publicized a definitive claim about the status of Kyrie Irving this upcoming season that is somehow equally as surprising and unsurprising given the nature of the mercurial star.

On Friday, a New York City Hall official told CNN that Irving will be allowed to practice at the team’s facility but will not be eligible to play in the Nets’ home games due to the city’s vaccine mandate.

Irving keeps beating the privacy drum as it relates to his vaccination status, but the media circus that surrounds his absence makes privacy damn near impossible.

“I know the focus has to be at an all-time high, no distractions. This is the last thing I wanted to create, was more distractions and more hoopla and more drama around this.
“I’m doing my best to maintain this with good intentions and a good heart.”

The reactions to the seven-time All Star forfeiting $15 million in salary and potentially a shot at winning the franchise’s first NBA title in the post-merger offer a glimpse into the culture’s pulse on the situation.

Malika Andrews with the 💯 on the Kyrie Irving situation:#NBATwitter pic.twitter.com/dYeFR2FG7X

“When I asked Kevin Durant how he’s viewing all of this, he said, ‘It’s an individual decision.’ I understand in some ways taking that approach or maybe that’s just what you say facing forward, but that is the antithesis of what a pandemic is. You do not have the privilege of just looking at yourself, you have to look at the people next to you, because that is how we got to this being the most deadly pandemic that has killed over 700,000 people in the United States.

That’s not all on Kyrie, but it’s on all of us to do our small part and his small part is in that locker room.”

Forget teammates, If a guy is willing to burn the house down and everything in it to make a point, he ain’t ya Patna!

If KD doesn’t step up on this Kyrie stuff, it’s gonna cost em everything they’ve built, including James Harden! Carry on… https://t.co/Rqn4npI6iB

Perk also said the reason he’s not a GM is because he’d straight up trade Kyrie. Lol.

Need a Knicks-Nets first round series for maximum chaos https://t.co/fAza72lbCF

Cavaliers window was still open, Kyrie wanting out closed it.

Celtics window was open, Kyrie wanted out and closed it.

Nets window is WIDE open, Kyrie sitting out might close it.

The Brooklyn Nets having a home practice with Kyrie: pic.twitter.com/awIcj0KS39

There are very few hoopers on Earth who can do what Kyrie Irving can do. He just, after all, had a 50/40/90 season as a guard.

But letting him have a completely different set of rules than the rest of the team … cannot understand it.

I’m old enough to remember when “Kyrie is the Good Guy and Lebron is the Toxic one that no one wants to play with” was The Narrative in the world of NBA media and Twitter.

If the Kyrie situation keeps going as it has, do the Nets try to tank their seed to 5-6 so they don't have home-court advantage and he can play in 4 games in the series instead of 3? 👁

New York authorities after seeing Kyrie sneak in for a home game pic.twitter.com/EAAhITRF64

"You know what drives me crazy? 'I'm doing my own research.' What does that look like? Are you doing studies yourself? Are you in lab on a nightly basis? I don't understand what that means."

We’ll see how well this plug-n-play method works for a team who’s still very much trying to find their identity.