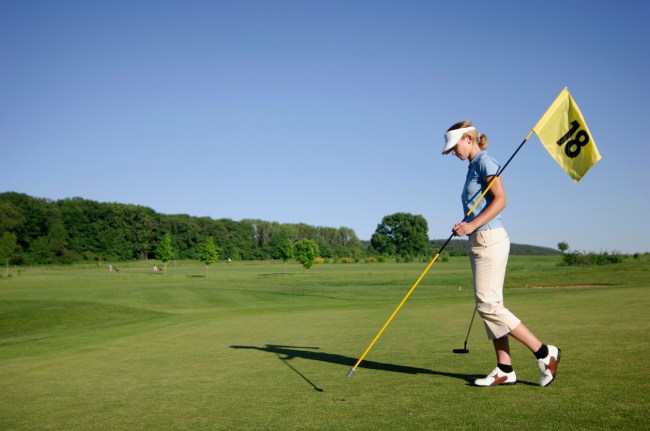 As the competitors wrapped up their two-day competition at River Valley Golf Course in Adel, Iowa, they were met with a nearly impossible finisher. After reaching the green, the girls were stuck with a vicious pin placement on the final hole of the tournament.

Local sports reporter Jake Brend was on the scene and gave a glimpse into the ridiculous pin placement. Although it was extremely unfair, it made for some incredible entertainment.

According to Brend, the average score on the final hole was a quadruple-bogey, in large part because of the impossible putting. He guessed that every single group took up to 20 minutes to putt out on 18th throughout the day, which caused the entire tournament to take 9.5 hours.

Brend also said that he saw a lot of 10-putts. In a video that he posted from the 18th green, it’s not hard to see why.

Today at the Girls 3A State Golf Tournament at The River Valley Golf Course in Adel, the average score on hole 18 was a quadruple bogey.

No, the golfers weren't bad, but this had to have been the most unfair pin placement I've ever seen. This slope gave the athletes no chance. pic.twitter.com/F7OyqIjbkO

Obviously, this should not be the case. Brend also made a great point that this one hole and the high scores that resulted from the pin placement, could cause real issues for some of the girls.

For people saying “everyone was putting on the same green,” you’re right.

But for some of these girls that are going to try and play college golf, this single hole could tarnish their chances.

The question now is who was at fault. Brend was able to confirm that it was not the Iowa Girls High School Athletic Union who decided on the 18th green pin position. Not great.

In the end, it was Rylee Heryford that won the 3A individual title for Newton High School. She and Eden Lohrbach finished the day with the same score, but it was Heryford that took home the trophy after three playoff holes.