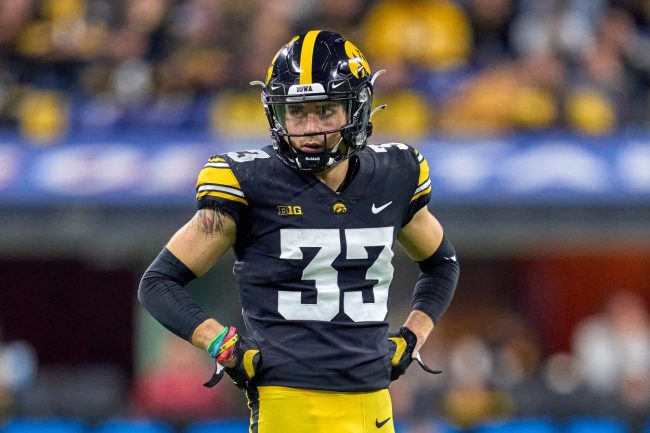 Ahead of Saturday’s Citrus Bowl against Kentucky, Iowa safety Riley Moss tried to talk some trash to his opponent. However, he was very, very wrong and failed miserably.

After practice on Wednesday, Moss spoke to the media. He said that the game is going to be fun and that Kentucky is going to give them their best shot.

“They haven’t made a bowl game in, you know, how long,” he said.

Iowa player says Kentucky hasn't been to a bowl game in a really long time so the Cats are probably super excited to play the Hawkeyes. pic.twitter.com/XaX0G2WPix

While the effort can be appreciated, it was a massive flop. Moss said that Kentucky has not made a bowl game in recent history.

That is extremely incorrect.

Kentucky, in fact, is one of two Power 5 conference programs that have a shot to win bowl games in four straight seasons. The Wildcats actually have had tremendous success in bowl games in recent years and have played in a game in each of the last five years:

On a technicality, Iowa falls into the same category along Alabama and Kentucky. The Hawkeyes had last year’s bowl game cancelled due to COVID-19.

Prior to that point, head coach Kirk Ferentz’ team had appeared in seven-straight games, having won in 2017, 2018 and 2019. They lost all four before that.

Thus, while Moss’ effort to talk some smack is appreciated, the in-state senior should get his facts in a row next time. Now Kentucky has extra motivation to pop him and his teammates in the mouth.