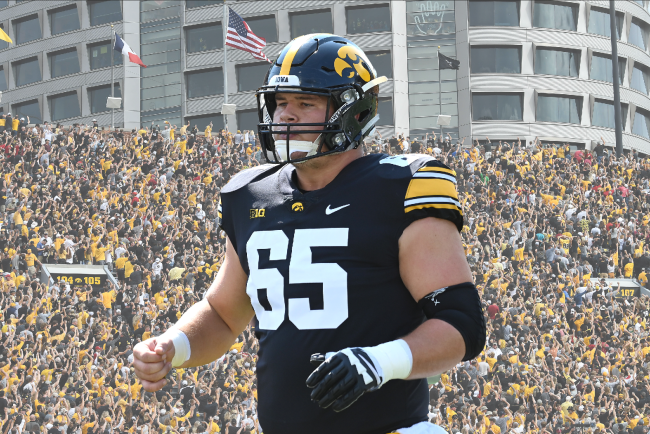 College athletes were finally allowed to make money from their Name, Image and Likeness over the summer. While some athletes are cashing major checks, Iowa offensive lineman Tyler Linderbaum is using his profits to give back.

Linderbaum, an in-state junior, is the team’s starting center. He was a preseason First Team All-American and First Team All-Big Ten selection and is a big part of an offensive line that helped the Hawkeyes go 10-2 and win the Big Ten West.

As such, it is no surprise to see him take advantage of NIL deals this fall. However, earlier this year, he made it clear that it was not his priority.

Despite his focus on the season ahead, Linderbaum made a lot of money. Although his total income is unclear, he made at least $30,000 and didn’t keep a penny of that number.

Instead, he used it as a part of a bigger cause.

Linderbaum donated the $30,000 to the University of Iowa’s Stead Family Children’s Hospital. His mother, Lisa, shared a photo of him outside of the hospital with a big check.

The Hawkeyes football team in particular has a strong connection with the Stead Family Children’s Hospital. It is located right next to Iowa’s Kinnick Stadium and the young patients can look out of their windows and see games being played on Saturdays.

In 2017, Iowa began the greatest tradition in college sports. At the end of the first quarter, the entire stadium turns to face the hospital and waves to the children in the windows.

For Linderbaum to give back to a cause by donating $30,000 is amazing. For him to donate such a significant sum of money to the hospital that has a deep-rooted connection to the sport that made him every dollar is truly remarkable.